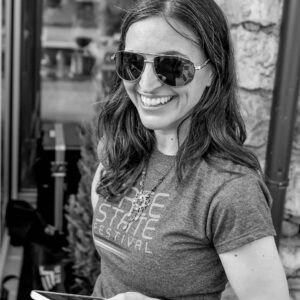 Marlo Angell has a degree in Cinematic Arts from the University of Southern California. She is the founding director of the Free State Festival, a founder of the female filmmaking collective, Women of Lawrence Film (WOLF), the New Media Director of the Lawrence Arts Center. Marlo is a member of the Film Festival Alliance, the Lawrence Cultural Arts Commission and a community tourism ambassador for Explore Lawrence . Her short films have been screened in festivals across the country including the AFI Los Angeles International Film Festival, and she wrote and directed the feature film, Waiting For The Son, starring Lupe Ontiveros and Brian Aldiss. Marlo has worked as a story analyst, freelance journalist, documentarian, film/writing instructor, and television producer. Her short plays have had readings and performances at the Fishtank Theatre, the KC Fringe Festival, and the Living Room Theatre. Marlo’s most recent film The Wishing Bench was awarded a Rebuilding East Ninth public art grant and she is now in production on a documentary on the East Lawrence neighborhood of La Yarda with collaborator Lourdes Kalusha-Aguirre and support from Humanities Kansas.