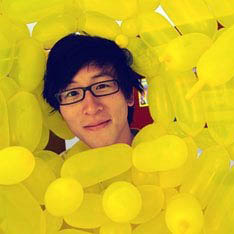 Willy Chyr is interested in generative art, storytelling, and the intersection between art and science. He holds a BA degree in physics and economics from the University of Chicago. While in college, Willy joined Le Vorris & Vox Circus and performed as a juggler, unicyclist, and magician. He also learned to twist balloons. Chyr’s art, which also uses the element of light, has been displayed in Millennium Park for Chicago’s Museum of Science and Industry’s LabFest! at the University of Chicago’s Biological Sciences Learning Center, and as part of the university’s Festival of the Arts, in which he created a women’s line of balloon fashion. He has been an artist-in-residence at the Bemis Center in Omaha and has exhibited in numerous other venues around the country. Willy will be creating a site-specific piece at the Lawrence Arts Center and work with Arts Center students June 11-15, 2012.