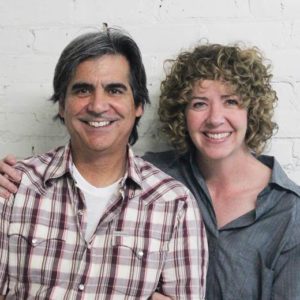 Gaelyn and Gustavo Aguilar (TUG Collective) will use their time and resources at the Lawrence Arts Center to design and printEthnographic Contrafacta, a collection of short essays/poems and graphic sound scores that will join six other works as part of Border, Corridors, and Lines of Desire. Emerging out of TUG’s three-year engagement with individuals and communities across the National Historic Lewis and Clark Trail, this multi-media installation deals with the interlocking dynamics of colonialism, immigration, and social race in U.S.-American history, and how these dynamics continue to resonate with a range of critical themes: Socio-economic mobility; movement and borders; assimilation and appropriation; and cultural citizenship.

TUG is an interdisciplinary arts collective that creates contact zones where people can generate insights about, and produce actions around, contemporary social issues. Since 2006, TUG has focused on participatory, problem-based interventions related to borders, borderlands, and other fuzzy frontiers, and their relationships to the global processes that put people, ideas, media, technologies, and capital into circulation with one another. TUG’s work has been presented in such creative spaces as the Luminary Center for the Arts, Charlotte Street Foundation, The Bemis Center for Contemporary Arts, Holter Museum of Art, FrontierSpace, Galería 409, Guapamacátaro Center for Art and Ecology, ARX Fest, Green Corridor, Guelph Jazz Festival and Colloquium, and the Center for Ethnographic Research and Exhibition in the Aftermath of Violence. In 2017, TUG received an Artist-in-Residence Fellowship from The Bemis Center for Contemporary Arts to work on Borders|Corridors|Lines of Desire, an installation dealing with the contradictions of US-American history. Summer 2018, TUG will be joining the faculty of the MFA Art Practice program at the School of Visual Arts in New York City.