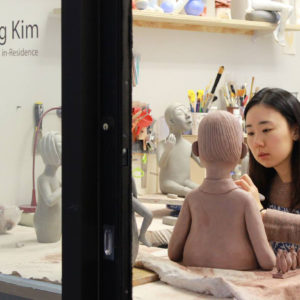 Gunyoung Kim was born in Seoul, South Korea. She received her BFA from Kook-Min University in Korea in 2010 and came to the United States to pursue an MFA in ceramic art. Gunyoung received her degree from The Ohio State University in 2014 and won the 2014 NCECA Graduate Award for Excellence. Following her residency at the Lawrence Arts Center, she went on to be a short term resident at the Archie Bray Foundation in Helena, Montana in fall 2015. She currently lives and works in Columbus, Ohio.