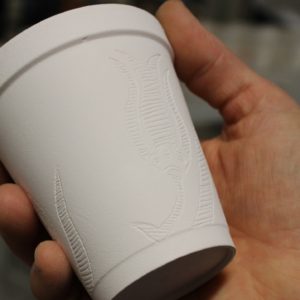 Artist Aaron Hughes began the Tea Project as a response to his military deployment to Iraq and Kuwait in 2003 and his return trip in 2009 as a peace delegate to the First International Labor Conference in Erbil, Iraq. As an artist, teacher, and activist, he works to create projects and scenarios in which diverse groups of people can collectively and personally address difficult topics and create meaning out of trauma. Amber Ginsburg is an artist, editor, writer and lecturer at the University of Chicago. Together with collaborators, Amber creates site-generated projects and social sculpture that insert historical scenarios into present day situations. Her work is strongly influenced by her background in craft and ceramics.

Amber Ginsburg and Aaron Hughes will work collaboratively to uncover moments of beauty, poetics, and shared humanity within little known military histories. Taking as their starting point a curious love story, a Guantanamo Bay guard who fell in love with the drawings on the Styrofoam cups carved by detainees, The Tea Project is an ongoing series of exhibitions and performances that offers counter-narratives to disrupt the numbing effects of war and detention. Through The Tea Project, they create scenarios that allow audiences a role in telling the story of our current involvement in war and torture.