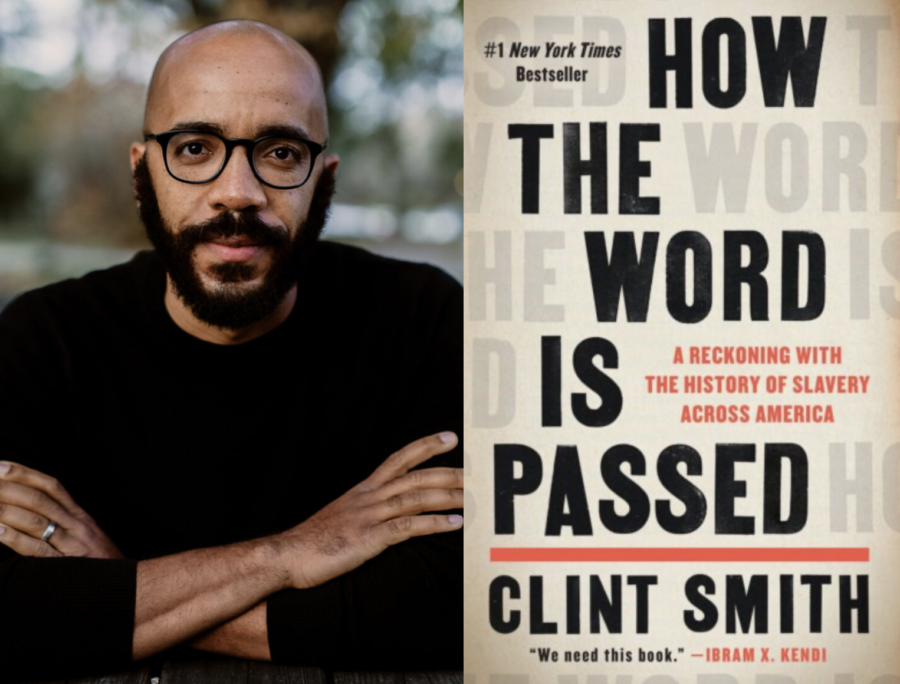 Renowned author Clint Smith will be joining on us on December 6, 2021 at 7pm at Liberty Hall to discuss his recently published nonfiction book, How the Word Is Passed: A Reckoning With the History of Slavery Across America, which was a #1 New York Times bestseller and was longlisted for the National Book Award. Smith is also the author of award winning poetry collection Counting Descent. Currently, Smith teaches writing and literature in the D.C. Central Detention Facility. He is also the host of the YouTube series Crash Course Black American History, which is a series focused on accurately educating youth about Black History.

Prior to the beginning of the book, Smith provides a land acknowledgement to the Indigenous peoples of America. He informs the reader that while his book is focused on the long standing systems of oppression and slavery, the very land which stolen people were sold to sits on land that was first stolen from its native inhabitants. Clint Smith is originally from New Orleans, where the beginnings of his book unfold. The prologue lays the scene—Smith recounts the Mississippi River and the buildings and architecture which surrounds it. The smells, sounds, and sights which bring back memories of New Orleans—the deep and rich, yet troubling history surrounding its existence.

Smith introduces us to New Orleans historian and activist, Leon A. Waters. They met through local activist group Take ‘Em Down NOLA, an activist group focused on “the removal of ALL symbols of white supremacy in New Orleans as part of a broader push for racial & economic justice.” Waters and Smith walk the reader through the information provided by a relatively new organization called the New Orleans Committee to Erect Markers on the Slave Trade. This organization works to implant plaques dedicating locations that were instrumental in maintaining New Orleans’ relationship with the Transatlantic Slave Trade. It is only due to the decades of work done by activists that organizations like this are in existence—the people who comprise them have dedicated their lives to eradicating their communities and ultimately, America, of white supremacy and the injustices faced every day by marginalized communities. Waters founded Hidden History Tours of New Orleans, a tour company invested in educating the masses on the history of slavery in America by showing people how vestiges of this point in American history still remain. Not unlike our current exhibition, Ghosts of Segregation by Richard Frishman. It is these very vestiges that connect us to our haunted past and are the propellants for continued work toward equality for all. The words and histories recounted in How the Word Is Passed can be connected to Ghosts of Segregation through this quote taken from Smith’s book:

“It was in May 2017—after the statue of Robert E. Lee near downtown New Orleans had been taken down from its sixty-foot pedestal—that I became obsessed with how slavery is remembered and reckoned with, with teaching myself all of the things I wish someone had taught me long ago. Our country is in a moment, at an inflection point, in which there is a willingness to more fully grapple with the legacy of slavery and how it shaped the world we live in today. But it seems the more purposefully some places have attempted to tell the truth about their proximity to slavery and its aftermath, the more staunchly other places have refused. I wanted to visit some of these places—those telling the truth, those running from it, and those doing something in between—in order to understand this reckoning.”

This statement resonates with photographer Richard Frishman’s statement regarding the Ghosts of Segregation exhibition. Both men, approaching the same subject from different perspectives and with different mediums, with the same goal in mind—remind people of where we have been, where we are going, and where we could be.

Click here to reserve your free tickets to this event on December 6th!