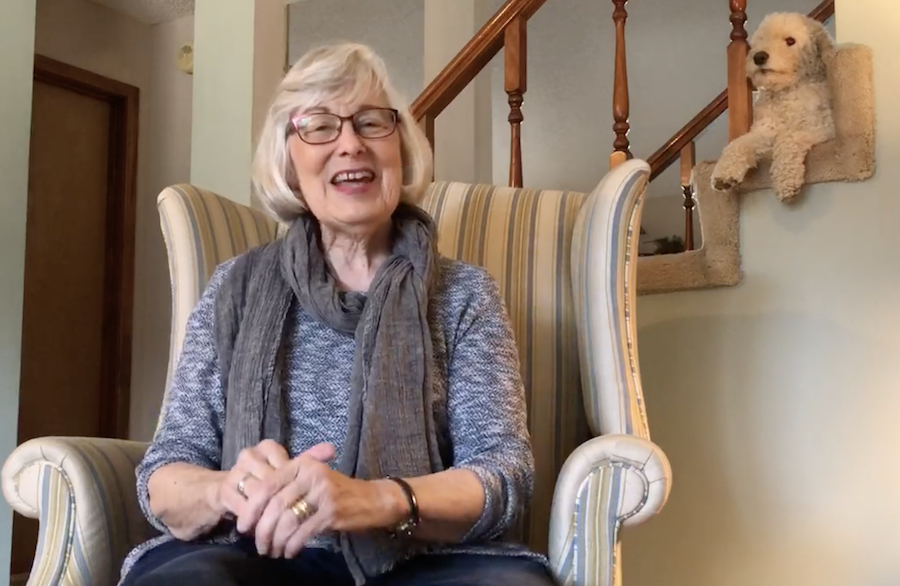 Back when she lived in California, Lauren Parr started touring preschools when her daughter was 18 months old in search of the right fit. None impressed her — until she came to Kansas and met Linda Reimond.

“We were touring the (Arts Center), and had this opportunity to see her in her teacher-mode handle a kid who had done something aggressive,” said Parr. “One of the boys threw a toy or hit a kid, and Linda stopped, and she turned to the boy and she got down and said, ‘we don’t hit,’ in exactly the way you’d want. There was no shame involved.”

The rest of the tour unfolded seamlessly, and Parr enrolled her daughter right away. Parr’s son, Tobin, will start preschool at the Arts Center in the fall, but Reimond will no longer be the school’s director.

Linda Reimond gives instructions to children in the garden area at the Lawrence Arts Center in this 2011 file photo. Reimond is director of the center’s preschool program.

Reimond’s retirement has inspired many people to reflect on her legacy.

Kate Winter, 41, attended the preschool as a child, and then, having moved out of state as an adult, used the Arts Center as a selling point to persuade her husband to move to Lawrence.

“I just remember how much I loved the feeling of the whole place, and Linda was a part of that,” Winter said. “She’s been doing it for so long. She’s out there in the hallway every day and doesn’t seem to get flustered. I’m in awe of her steadiness and calm and her ability to stay devoted to this. We’re all going to have to chip in now and lead the way.”

Arts Center CEO Margaret Weisbrod Morris has worked with Reimond in some capacity for more than 20 years. Having moved to Kansas from New York, Weisbrod Morris says Reimond is a treasure exclusive to Lawrence.

“You have someone like Linda who has always been here — everyone knows how great she is — but from an outsider’s perspective, I’ve never met anybody as talented as she is,” Weisbrod Morris said. “She is an icon, a pioneer and a visionary. She is one of those people who definitely changed what early education looked like. The Lawrence arts-based preschool is one of the first arts-based schools, and she started it.”

When Reimond was hired to teach integrated arts in 1982, the Arts Center was located at the Carnegie Building, 200 West Ninth St. Reimond and others launched the preschool in 1985 and it was limited to one classroom, lacking the outdoor play-space students now use for sand, water and free-play activities. Fortunately, Reimond has always possessed a natural skill for identifying play opportunities in any environment.

“There were some benches outside, and we’d go over and play the bench game. The kids would choose a bench, and we’d yell, ‘one, two, three, find another bench!’ And everyone would start running, and they’d freeze, and then we’d do it again.”

In the 1980s and ’90s, there was a national trend toward academic-based instruction in preschools, contrasting with the sort of activities featured in Reimond’s classroom.

Gripped with anxiety, parents pelted Reimond with questions about the quality of instruction:

Reimond believes strongly in the power of play and its ability to facilitate learning in young children. In her view, following the natural development of a child and using what they do best — play — reaps tremendous benefits.

Ann Evans, the former director of the Arts Center, said it was easy to support Reimond and her approach once she saw her in action.

“Little kids are creative people,” Evans said. “This just encouraged that. The more I learned about what she was doing, it was so easy for me as a director to go to bat with her. I was such a believer.”

“These are five things we can do now, but they’re going to last a lifetime,” she said.

“Miss Linda has changed Lawrence in a way we can’t fully comprehend by influencing generations with her child-centered approach,” said Parr. “We are so lucky she has laid the groundwork and that her energy and dedication to the community will surely continue for years to come.”

After 35+ wonderful years of instilling a love of learning in all those around her, … [more]