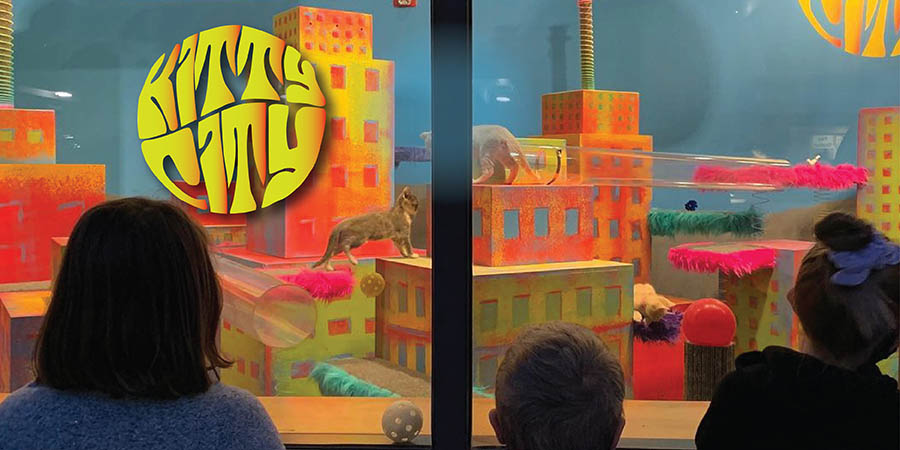 Kitty City said goodbye this week to Bingo, its final feline resident. During the past four months, this partnership with the Lawrence Humane Society gave us countless hours of entertainment and located happy homes for nearly 50 cats – including Ingemar who was adopted by our very own CEO Margaret Weisbrod Morris!

Exhibitions Director and Kitty City Planner/Architect/Builder Ben Ahlvers said the project had been designed not only as a means to find forever homes for the kittens, but also as a distraction for people who might be growing weary during the months of winter quarantine.

“With the pandemic in full force I thought we might create an opportunity where people could come out and see something uplifting” he said. “My hope is that all the smiles I’ve seen around Kitty City over the past couple of months did some good for the community.”

Ahlvers called the partnership with the Lawrence Humane Society seamless, and said that even through the two organizations had different missions, they both understood the importance of doing something creative during the depths of the pandemic.

Alisa Farinelli, Senior Manager of Programs for the Lawrence Humane Society said the partnership had been a success on multiple levels, and that the Lawrence community had stepped up to help even more cats than those who inhabited Kitty City.

“By adopting a pet, you can save the lives of two animals,” Farinelli said. “The animal you adopted gets a loving new home and there is now space in the shelter for another homeless animal. Adopting instead of shopping supports your community, both the animals and the people.”

For those looking for additional ways to offer their support, the Lawrence Humane Society will have multiple events coming up this spring. For those who would like to raise money, LHS will again be hosting the Paw Valley Challenge, a month-long event beginning April 1 where participants can walk run or bike to raise fund for the shelther. Also this spring is the Mass St. Kitten Academy at Wild Man Vintage. Stop by and visit kittens at the store or follow them on Instagram! Information about both programs can be found on the LHS website.

The Arts Center visitors and staff will miss the residents of Kitty City, but while the entertainment was nice the end result was event better.

“It warms my frigid heart to think of the homes that now have some four-legged joy running around as a result of this project,” Ahlvers said. 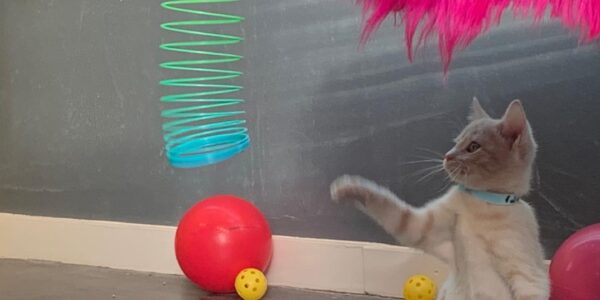