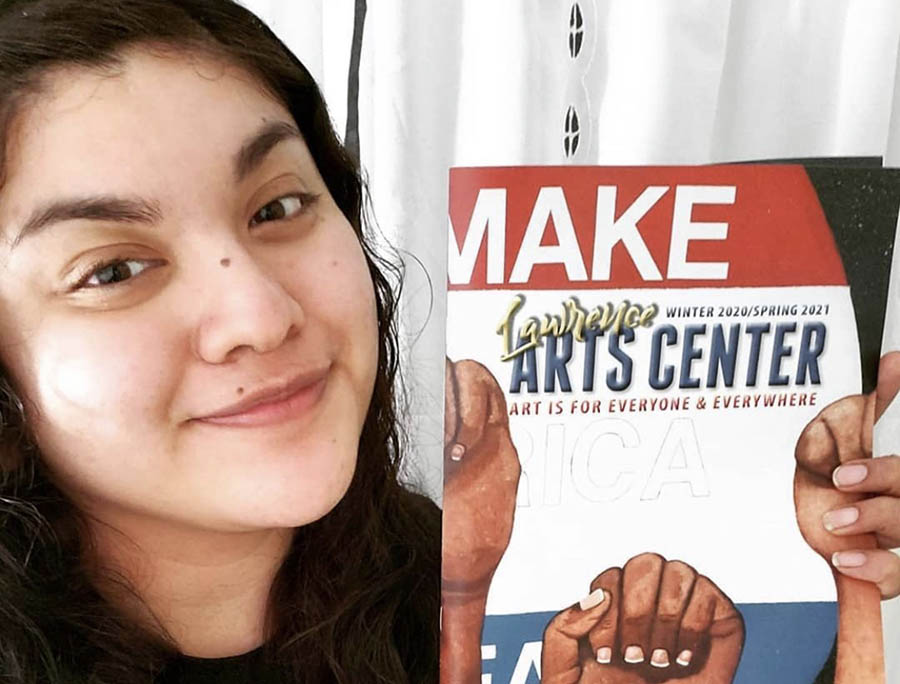 The cover of the Lawrence Art Center’s Winter/Spring catalog was both a moment and a lifetime in the making.

Lawrence artist Blanca Herrada said the idea for “United in Revolution” came to her after attending the Women’s March on Washington in 2017. Herrada said she was among a group of women of color who came together to raise funds to attend the rally, which immediately followed the inauguration in January. Upon her return, she recalled the MAGA message and decided she wanted to put a more inclusive spin on it. Herrada wanted the image of her companions’ raised fists to reflect that America’s greatness had not been possible without the contributions of black people, indigenous people, and all people of color. 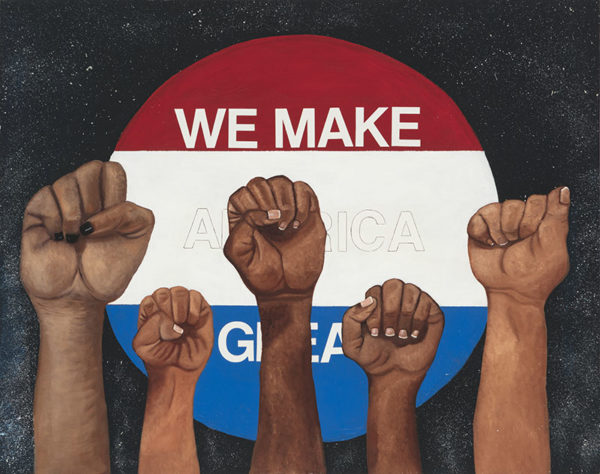 “Our rich histories and cultures have shaped this country and continue to do so,” Herrada said. “BIPOC make America great. We are strong. We are resilient. We matter. We make this country great despite the hate, despite the rhetoric, despite it all. We rise above and make our voices heard.”

“United in Revolution” is not Herrada’s only foray into work that addresses the existence and struggles of people who have traditionally been seen as “other.” Her most recent show, Para Mi Gente (For my People), was purposely focused on BIPOC, who are frequently underrepresented in art. She said that being a woman of color is inherently political, and that her existence as a queer woman of color is in and of itself resistance.

“To survive and eventually thrive in a country, a career, a world that has long been upheld and standardized by white men is political,” Herrada said. “We exist in a country whose current elected leader demonizes us, who encourages violence upon BIPOC communities, who upholds white supremacy. The existence of BIPOC people is inherently political. And it is BIPOC people and our stories and our narratives that inspire my work.”

Herrada, who formerly taught as part of the Arts Center’s StARTup program, was originally inspired by a high school art teacher who encouraged her not only to experiment with a wide array of media and techniques, but also to follow her passion. In college, Herrada initially went into the art therapy, but almost immediately was drawn into arts studio programs. She eventually earned a degree in drawing and painting with a minor in art history. Herrada said Emporia State University drawing professor Dan Kirchhefer inspired her approach to making art.

“He encouraged me to experiment, to make mistakes, to learn as I went,” she said. “He offered his hilarious and wise insights to the world around us, while saying that a piece I was trying to submit for a grade was, ‘a good start.’”

Currently Herrada finds herself working to conveying emotion in all of her work as she explores personal and cultural evolution. She is currently focused on digital work while wrapping her head and heart around the motivations of 2020. She looks forward to commissions and contributing work to Arts Center events including our upcoming Souper Bowl. You can contact Herrada and find her work on Instragram @_casualdreamer.