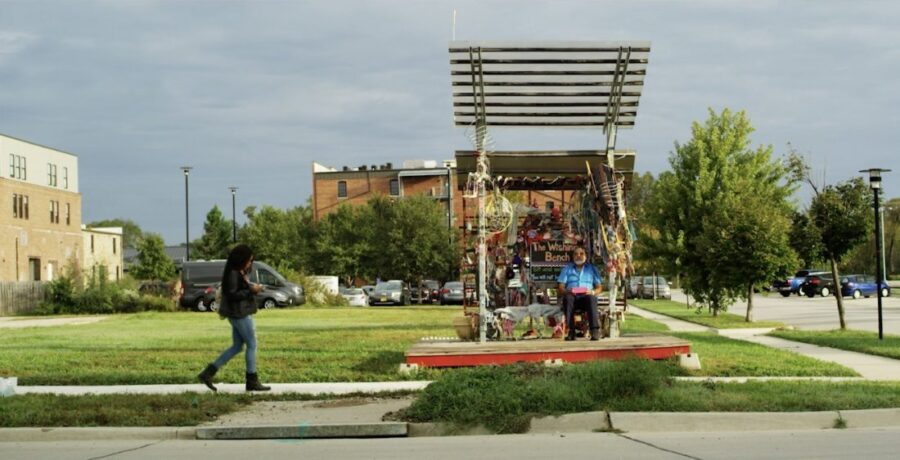 A short film featuring the mysterious and iconic East Lawrence Wishing Bench will premiere this week in the neighborhood that gave the film its story.

The 12-minute film, which is simply titled “The Wishing Bench,” is one of the final works of art in the Rebuilding East Ninth Street public art project, and director Marlo Angell focused on integrating the stories and memories of the East Lawrence neighborhood into the screenplay, holding events to allow residents to share their ideas.

At the center of it, of course, is the elaborately decorated bench — a shrine-like collection of objects with a sign that reads, “Sit and make a wish. You will not be disappointed.”

In the film, an out-of-towner, portrayed by University of Kansas student Maxine Nwachukwu, sits at the Wishing Bench, believing it to be a bus stop. She gets into a conversation with an older Mexican American man from East Lawrence, portrayed by José Faus. They discuss the history of East Lawrence, including the story of La Yarda, a housing complex built for Mexican railroad workers in the mid-1920s that was destroyed in the flood of 1951.

Little is known about how the bench came to be, according to a 2018 article from the Journal-World. Some people believe it was once a temporary University of Kansas School of Architecture project that eventually was “adopted” by the neighborhood. It doesn’t have formal ownership, and is continuously changing with additions from community members.

Angell said these qualities make it the perfect setting for a film focused on memories and taking a minute to sit and reflect. It was also the ideal place for a film that doubles as a community art project.

“The Wishing Bench is such a beautiful, iconic east Lawrence landmark,” Angell said. “What I love about it — it’s always changing … things are added to it, things are taken away. In itself it’s a community art project.”