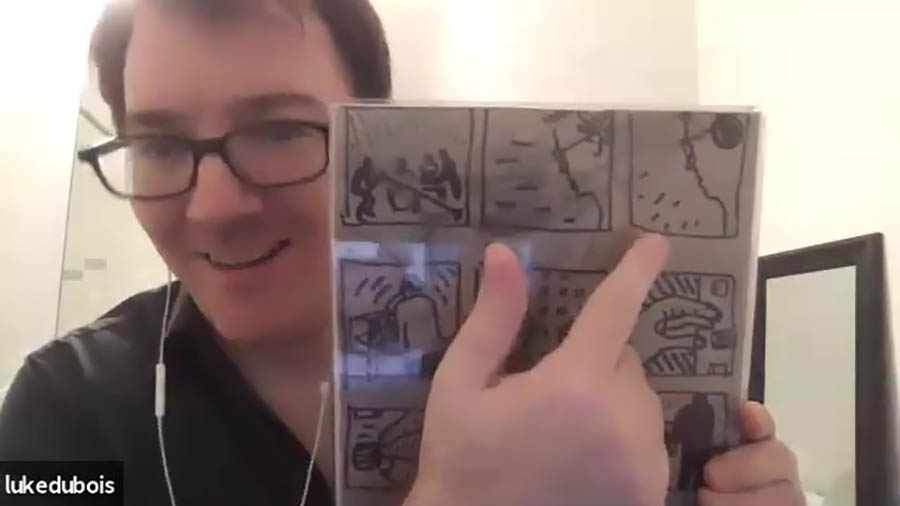 Ever wonder what artwork artists live with?

This series offers a glimpse into the homes of artists through online conversations about work of art they have in their homes. Tune in and gather some insights into what living with art can do.

Luke DuBois is a composer, artist, and performer who explores the temporal, verbal, and visual structures of cultural and personal ephemera. He holds a doctorate in music composition from Columbia University, and has lectured and taught worldwide on interactive sound and video performance. He has collaborated on interactive performance, installation, and music production work with many artists and organizations including Toni Dove, Todd Reynolds, Chris Mann, Bora Yoon, Michael Joaquin Grey, Matthew Ritchie, Elliott Sharp, Michael Gordon, Maya Lin, Bang on a Can, Engine 27, Harvestworks, and LEMUR, and was the director of the Princeton Laptop Orchestra for its 2007 season.

Stemming from his investigations of “time-lapse phonography,” his work is a sonic and encyclopedic relative to time-lapse photography. Just as a long camera exposure fuses motion into a single image, his projects reveal the average sonority, visual language, and vocabulary in music, film, text, or cultural information. Exhibitions of his work include: the Insitut Valencià d’Art Modern, Spain; Haus der elektronischen Künste, Switzerland; 2008 Democratic National Convention, Denver; Weisman Art Museum, Minneapolis; San Jose Museum of Art; National Constitution Center, Philadelphia; Cleveland Museum of Contemporary Art; Daelim Contemporary Art Museum, Seoul; 2007 Sundance Film Festival; the Sydney Film Festival; the Smithsonian American Art Museum; PROSPECT.2 New Orleans; The Lawrence Arts Center and the Aspen Institute. DuBois’ work and writing has appeared in print and online in the New York Times, National Geographic, and Esquire Magazine, and he was an invited speaker at the 2016 TED Conference. A major survey of his work, NOW, received its premiere at the Ringling Museum of Art in 2014, with a catalogue published by Scala Art & Heritage Publishers.

DuBois has lived for the last twenty-five years in New York City. He is the director of the Brooklyn Experimental Media Center at the NYU Tandon School of Engineering, and is on the Board of Directors of the ISSUE Project Room and Eyebeam. His records are available on Caipirinha/Sire, Liquid Sky, C74, and Cantaloupe Music. His artwork is represented by bitforms gallery in New York City. 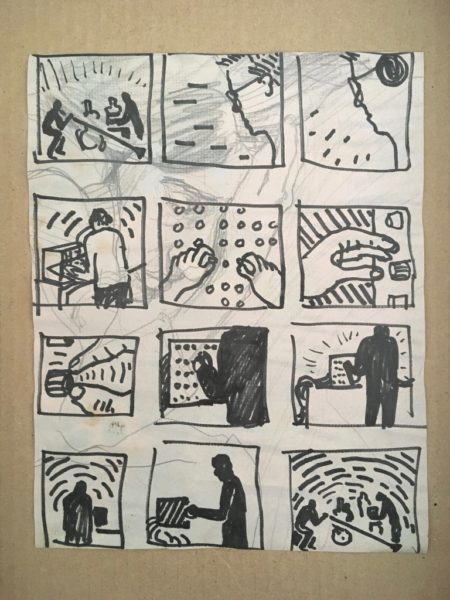 Jonathan Allen works in painting, collage, video, and performance. He holds a B.A. in Visual Arts / Art History from Columbia University, and in New York has exhibited at BRIC, Lu Magnus, PS122, Exit Art, Socrates Sculpture Park, Artists Space, Bravin Lee, FiveMyles, and Caren Golden, among others. He has participated in Lower Manhattan Cultural Council (LMCC)’s Workspace, Process Space, and Swing Space residency programs, the Bronx Museum of Art’s Artist in the Marketplace program, and has been awarded residencies at the Bogliasco Foundation in Italy, Cill Rialaig in Ireland, Milvus Artistic Research Center in Sweden, and Blue Mountain Center. He is a recipient of grants from the Pollock-Krasner, Chenven, Puffin, George Sugarman Foundations and Brooklyn Arts Council.

Allen frequently collaborates with poets and performers, and is currently working on ABOUT A MINUTE, a series of short videos with New York poets, FOUNDERS, a series of pop-up performances at NYC contemporary art museums, and INTERRUPTIONS, a series of ad interventions in New York City subway stations, seeks to interrupt the language of advertising with imagery from our current political predicament.

Allen is on the Programming Committee of VoCA (Voices in Contemporary Art), and lives and works in New York City.