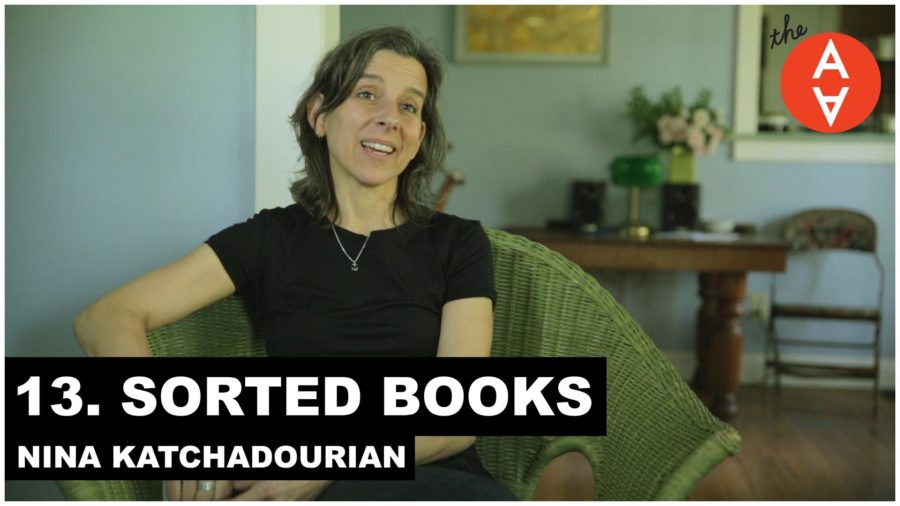 In 2014, William S. Burroughs would have turned 100. To celebrate, there were events, exhibitions, and various tributes throughout the world. The Lawrence Arts Center hosted the largest Burroughs exhibition that year. Mr. Burroughs lived over 20 years of his life in Lawrence, and the city is still home to the estate. In May 2014, the Lawrence Arts Center, in partnership with the Burroughs estate, invited artist Nina Katchadourian to come to Lawrence and expand on her Sorted Books series. Katchadourian sorts through a collection of books, pulls particular titles, and eventually group the books into clusters so that the titles can be read in sequence. The final results are shown either as photographs of the book clusters or as the actual stacks themselves, often shown on the shelves of the library they came from.

Taken as a whole, the clusters are a cross-section of that library’s holdings that reflect that particular library’s focus, idiosyncrasies, and inconsistencies. They sometimes also function as a portrait of the particular book owner. We showed a collection of images from her Burroughs Sorted Books project at the 2014 Free State Festival.

The writer William S. Burroughs lived the last sixteen years of his life in Lawrence, Kansas, and in May 2014 I spent the better part of week there, looking through his personal book collection and eventually constructing a Sorted Books piece.

Burroughs’s reputation and mythology—not just as writer, but as traveler, drug-user, artist, shaman, muse and friend to many of the Beats—precedes him. I came to his book collection having read some of his work, but by no means comprehensively, nor was I particularly well-informed about the details of his life. Perhaps precisely because of all myth and hearsay, I thought it might be useful to arrive a little under-informed so as to be able to take the books at face value, and to let the books themselves serve as the medium through which I’d come to understand more about Burroughs’s life and work.

There were about fifty boxes of books in addition to five or six bookshelves. Some were free-standing cases with glass doors that had been kept more or less in the order Burroughs had lived with them. In the cases, books shared space with various small figurines, relics and gifts. Surprises lurked behind many book covers. Burroughs was, famously, a gun enthusiast, and a blue clothbound copy of L’Interprétations de Moliere had a carved-out cavity for a small handgun. In a paperback medical thriller called Nerve with a blazing green skull on the cover, I followed a hole all the way through the book until I arrived at the bullet.

His books also reflected a profound interest in animals and wildlife. (I was told by one of his friends that he loved animals, and never hunted—besides the occasional book he might have aimed a gun at, he only shot at targets). He loved cats, and at one point lived with around twenty of them: eight indoors, and twelve outdoors. Many friends gave him books about cats, evident from the inscriptions inside many of the books. References to cats come up in unrelated books as well. In a paperback called “Smack!” with a deadly-looking needle and heroin packet resting on top of an American flag, a cheerful inscription read “Dear William, Thanks for letting me cat-sit!”

It was often psychically exhausting to spend time with William Burroughs’s books. He clearly had a curiosity about, and high tolerance for, the darker and more extreme forms of human behavior. I came to dread one bookshelf in particular, where the subjects jumped in manic fashion from charming picture books about cats to books about torture and physical interrogation techniques, witchcraft, and strangulation. Burroughs seemed to have a fortitude of spirit that allowed him to delve deeply into subjects like this, whereas spending time with even one of those books could me feeling anxious and nauseated. I looked at a book on shark attacks with pictures so graphic that it gave me nightmares. Some of these books felt like research that fed the stuff of his writing and his imagination. But he clearly read a great deal purely for pleasure too, as evidenced by the enormous number of medical thriller paperbacks in his collection. Burroughs often wrote in his books, but these cheap paperbacks had more marginalia than any other type of book. Long screeds in Burroughs’s hand on the implausibility of the plotlines or characters often started the instant after the last published sentence, and continued on for all the remaining end pages (one critique began “Too many outrageous improbables: Reggie would never have $, junk and coke in # stashed under his own name”). His opinions were straight to the point and vividly in his voice. On the cover of a book called How We Die, Burroughs wrote between the lines of the title “Include me out of your we.” There were also short, cryptic, and often beautiful phrases such as the one written on the title page of a paperback called Psychward: “We were the first that burst into that silent sea.” In a thriller called Lost Souls, Burroughs has written “The tide is coming in from Hiroshima you dumb earth hicks. Sauve qui peut.”

Kansas Cut-Up, the title I finally chose for my series, is obviously meant to reference Burroughs’s cut-up technique for writing, where the use of pre-existing texts, combinatory processes and the embracing of chance are hallmark properties, as they are for “Sorted Books” pieces as well. Being “cut up” also indicates a state of distress about something; a “cut up” is also a term for a mischievous, unruly, funny person. My week with William Burroughs’s books made it clear that among so many things that he was, that he was all that too.