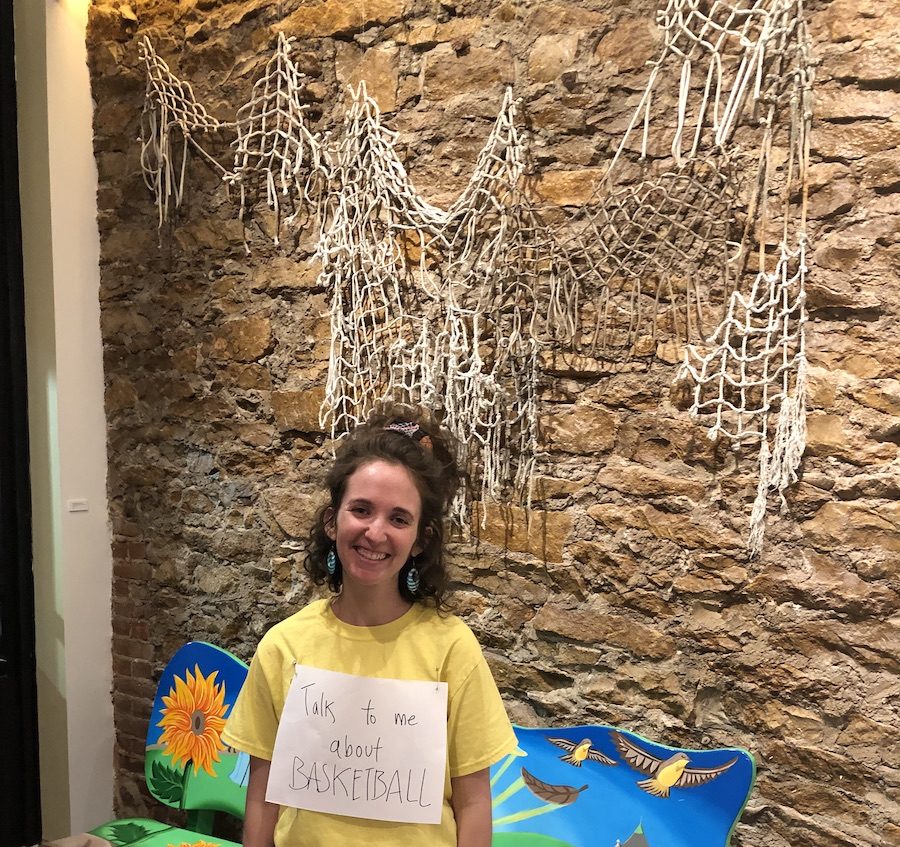 We had the pleasure of sitting down with our Project-Based Resident, Abigail Smithson for a brief interview. Her exhibition is up at the Lawrence Visitor’s Center until March 20, 2020.

Abigail Smithson is a multi-media artist based in Tucson, Arizona. Born and raised in the Bay Area of California, she received her Bachelor of Arts with a minor in history from the University of Colorado at Boulder in 2010 and her Master of Fine Arts from Louisiana State University in 2017. With a focus on documentation, her work is rooted in the appreciation, translation and act of making records. Basketball is her muse; she uses the game as a lens for viewing issues surrounding the body and representation. Her art practice is a way to respond to the history and current culture of the game.

Q: Did you play any sports as a child?

A: I did play basketball, but not for too long. There were 3 or 4 years where I really loved it but lost interest in direct competition, it just made me kind of anxious.

Q: How did your love of basketball come about?

A: I have a nice Jumpshot! I like shooting until I miss. I think that’s why I like games like H-O-R-S-E or Knockout, so that was always fun for me. My mom and dad were sports fans. Of course I always watched sports on the weekend with them. It was the mid-90s with Michael Jordan playing for the Bulls. I was in love with him. I guess I have always gravitated towards basketball, all my heroes were there. The sport really provided me an outlet for someone to look up to. 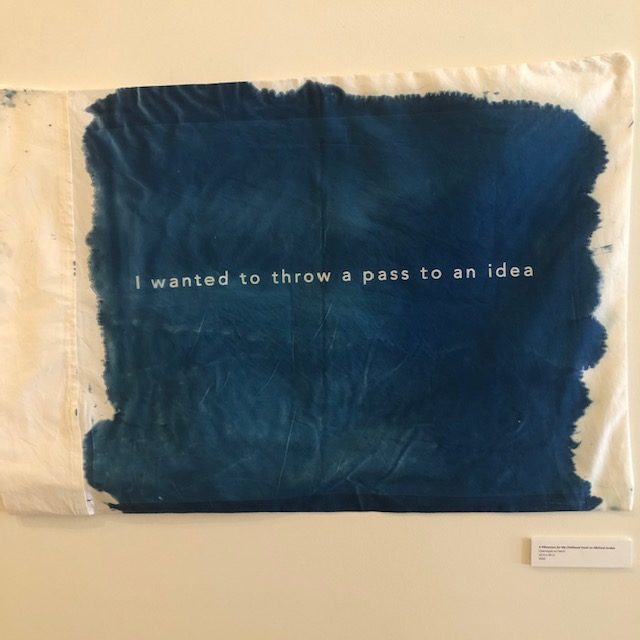 A Pillowcase for My Childhood Crush on Michael Jordan: Abigail Smithson

Q: When did you start to explore art as a medium of expression, and how did you come about concentrating your work towards basketball?

A: I first got into photography in middle school. I had found a 35 mm camera that my dad had. I’ve never really been good at drawing or crafts, but I felt really comfortable behind the camera. I stayed there until I went to graduate school at Louisiana State University. I had a professor turn everything upside down on me. Her name is Kristine Thompson, and her class challenged me to make an alternative record; essentially, how could I be a photographer and not pick up a camera?

With my art, I wanted to celebrate basketball and I wanted to be able to critique it. Research can be as much of an art practice as putting a brush to a canvas. Reading other people’s perspectives about basketball became important to me because I’m not a basketball player, I’m not involved in basketball in a traditional way. I realized through this research, one can learn about American history through basketball. This process became an opening for me where I felt like I could be an archivist or documentarian without making images of an actual place.

Q: What inspired you to reinterpret the game using the idea of object memory to create your art?

A: I am a very object oriented person and I believe that objects have power, and can help us to retrieve memories, which translates to my art very easily. I already had these tendencies from working with Kristine. She posed the question, “If a photo can be an object, what object can stand in for a photo?” A few months later, that’s where the idea to use basketball nets as a record came about.  When I started picking up the basketball nets I realized that these are the records of that place and all the games played on them. They are an alternative record, a picture without a camera. 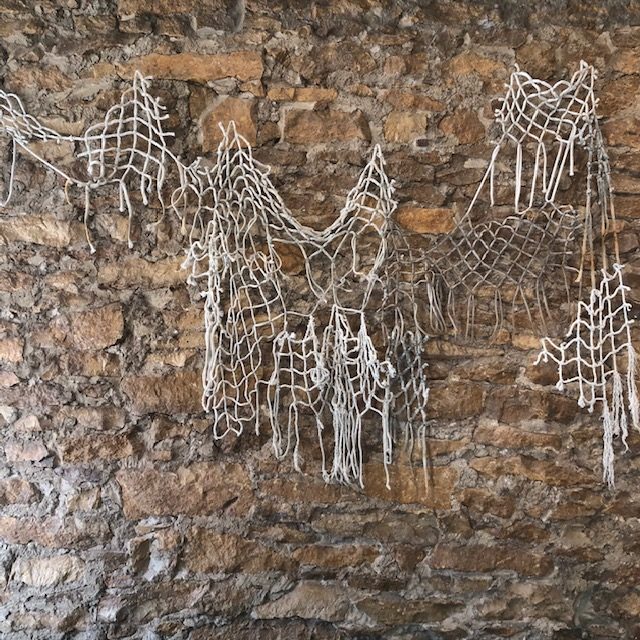 Q: What story do you hope to tell about Lawrence while in your residency?

A: I’m excited to be here because there are deep basketball roots in Lawrence. It is such an iconic place for hoops, especially around KU. But I am also hoping to uncover how basketball exists outside the university and some of the stories that have not been told as often.

I am interested in the people and how they feel about basketball. Everyone has a different relationship to the sport. I love basketball, and I feel like my art is a way of showing that, but it’s because I am choosing to spend time with it, not because I am writing love letters to basketball. I just like talking about what the sport means beyond the game, and I like making it an inclusive place. Sometimes sports places can feel exclusive, sometimes art spaces can feel exclusive and to me it seems like there could be a space for both of those two entities to converge. 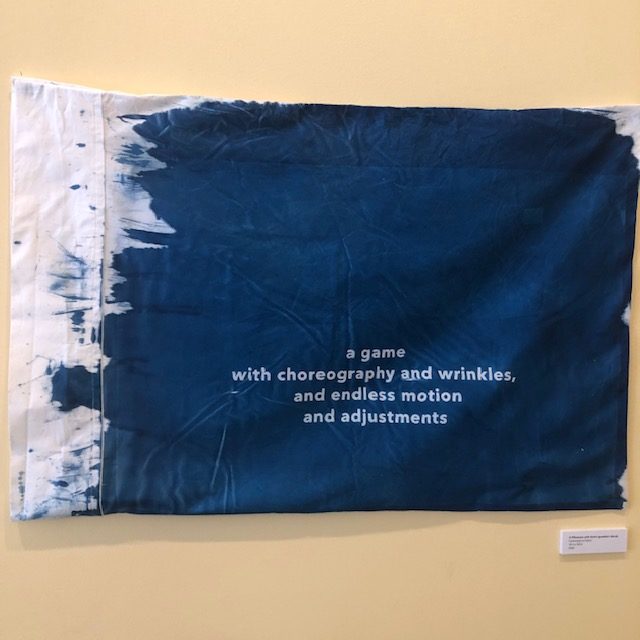 Q: What has surprised you so far either about Lawrence, or our basketball history?

A: When I went to the KU game it didn’t feel particularly rowdy. It felt more reverent, like there was a lot of attention being paid. For example, the student section had a lot of cheers that felt special to KU. I guess I was just expecting a little more aggression.

Also, I knew that James Naismith had worked here and brought basketball here, but I did not know that the rules were here, so that was a curve ball. I saw the rules written on the outside of the DeBruce Center when I went on tour of the campus, and they said, “Yeah, the rules are right down the hall.”

I really value documents and I think that having the original copy of the rules has a lot of value and appreciated history to it. I even asked them, “Why wouldn’t the Basketball Hall of Fame want the beginnings of basketball?” Just the idea that Lawrence has played such an important role in the history of basketball really surprised me.

A huge THANK YOU to Abigail for answering our questions. To learn more about sports, art, and the creative place that they share, listen to Abigail Smithson’s podcast Dear Adam Silver, available on iTunes. 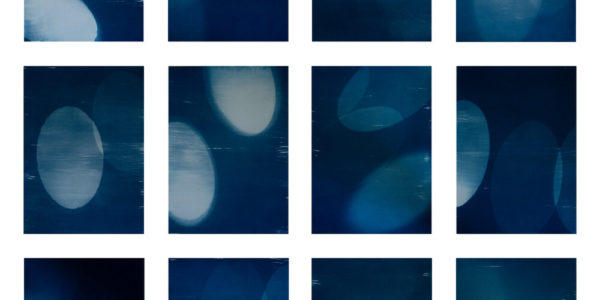 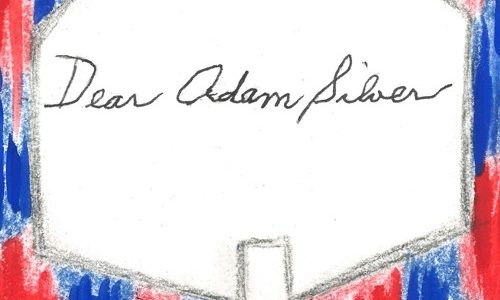 Abigail's podcast about sports, art, and the creative place where they meet.