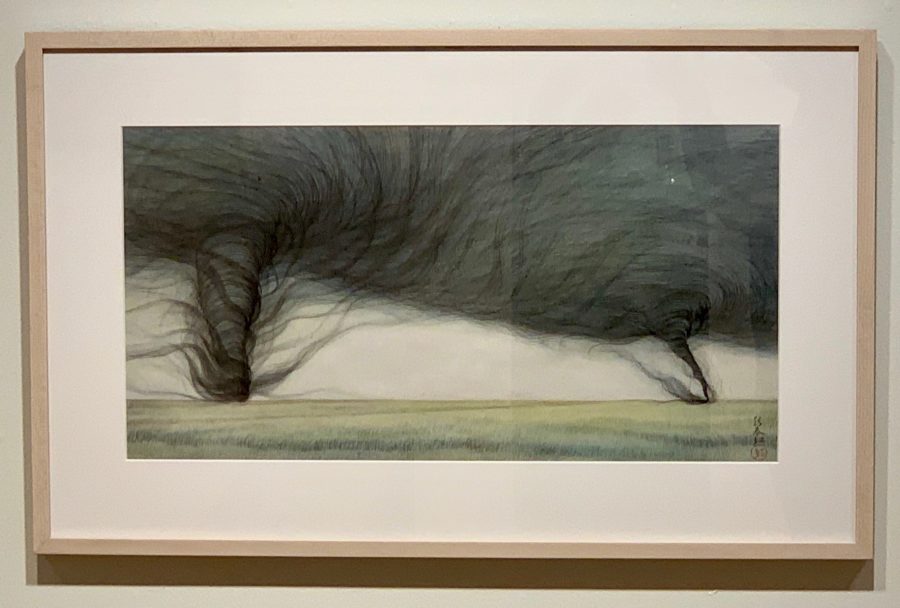 Each year the Lawrence Arts Center selects an artist to feature in its galleries. This artist generously donates works
to be sold in the Annual Benefit Art Auction immediately following the Featured Artist Exhibition. We were honored
to host Hong Chun Zhang as the 2012 Featured Artist.

Hong Chun Zhang was born and raised in China, but her recent collection of ink paintings reflects the power of nature in her adoptive home, Kansas. Having studied under both Chinese and American fine arts educational systems, Hong discovered a balance between the two cultures and artistic styles. Hong’s recent work combines traditional skills with modern concepts. Her recent fine style ink paintings feature typical Kansas imagery including tornadoes and the Flint Hills, but illustrate them with delicate hair.

Raised with two sisters by parents who were both art professors, Hong and her twin sister Bo won a national competition at age 15 to attend the high school attached to the Central Academy of Fine Arts in Beijing. In 1994, Hong received her BFA from Central Academy of Fine Arts. She went on to earn an MA from California State University, Sacramento in 2002, and an MFA from the University of California, Davis in 2004.

Hong has received many significant grants from organizations including The Dedalus Foundation and the Pollock-Krasner Foundation. Her work has been exhibited at The Smithsonian National Portrait Gallery, Asia Society at Texas Center, and Contemporary Museum of Art Norway. It is also in the permanent collections of the Spencer Museum of Art at the University of Kansas, The Ulrich Museum of Art at Wichita State University and in international  private collections on contemporary Chinese art including the White Rabbit Museum in Sydney and the DSL collection in Paris. Hong’s next show in April 2020 will take place at Milan Royal Palace. Hong and has been represented by Haw Contemporary Gallery in the Kansas region since 2015.