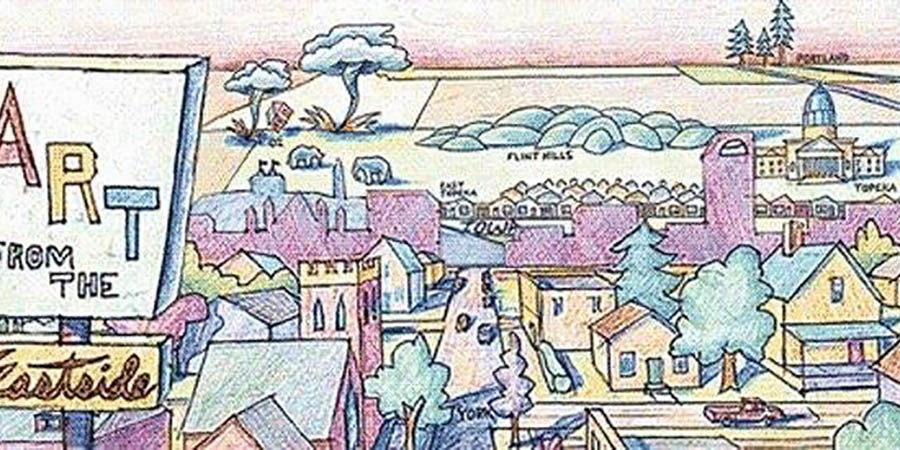 A contemporary ballet, a plastic waste sculpture and a music album are some of the works that young artists will contribute to the East Ninth Street art project.

The East Ninth Project put out a call for youth art projects this fall and received five applications, according to project facilitator Mandy Enfield. Each project — done by a middle or high school student — will receive a $1,000 grant to complete the artwork or performance.

Having a community component has been a key emphasis throughout the East Ninth Project, which also funded 10 artist proposals from adults. Enfield said the youth artists seemed to understand and incorporate that concept.

“The projects were super thoughtful,” Enfield said. “The kids just immediately got the community-based concept. I think every project speaks to that.”

The projects that have a physical component will be installed somewhere in East Lawrence and will be publicly accessible, Enfield said. Performance projects will have public shows.

The East Ninth Street art project is being funded by a $500,000 ArtPlace America grant that was awarded to the Lawrence Arts Center in June 2014. When originally proposed, the plan generated community debate and some concerns from neighbors, and it was ultimately scaled back. Originally, the art was to be designed and installed in tandem with the city’s street and walkway improvements along East Ninth Street, but the projects are now being done separately.

As part of the project, each youth artist or group of artists will work with an artist mentor or other adult to manage the project and the project’s budget. Enfield said that the youth projects were a win-win in that they supported the artists and enhanced the community.

“Even if they don’t go on to be artists, going through this process, I think, will familiarize them with putting themselves out there and doing public things, whether it’s advocacy or art or performing,” Enfield said. “So I think we’re really building our pipeline for the community, and it’s a great investment in that regard.”

Enfield said all the adult and youth art installations, performances and projects for the East Ninth Street Project would be completed by the end of May, and many would be incorporated into the May Final Friday event.

In addition to the ballet, sculpture and music album, youth artists will create a bus bench and a community art box. More detailed descriptions of each project, according to the news release from the project team and Enfield, are as follows:

“Embrace the Change” by Jahnava Sibilla: “Embrace the Change” will be a contemporary ballet performed to “Shake it Out” by English indie rock band Florence and the Machine. The performance is a commentary on the complexity of change experienced individually and collectively. Sibilla, noting that East Lawrence has changed and adapted throughout its history, says the piece is about letting go of the things that hold us back and how change can be scary. As part of the project, Sibilla will create the costumes and choreography for the ballet and lead three months of weekly rehearsals. The ballet will be performed in late April in the lobby of the Lawrence Arts Center.

“Apotheosis” by Jude Black: “Apotheosis” will be a sculpture created from colorful plastic waste. The goal of the project is to bring awareness and change to the growing problem of plastic pollution. Black will reach out to the community to gather materials and meet with residents involved with the East Ninth Project to learn community history. The sculpture will be completed in late April and will be installed at a currently undetermined location in East Lawrence.

EP by LK Ultra: East Lawrence band LK Ultra — composed of members Lily Pryor, Inez Robinson and Aden Smith — will produce a professional extended play recording, or EP. The band was formed in 2017 at Girls Rock Camp and has since worked to contribute to the local music scene by advocating for marginalized people and volunteering at the camp. The band members state that their EP will allow them to share their voice and art outside of Lawrence. There will be a release party for the EP in March and a show in late April.

East Lawrence Bus Bench by Liberty Memorial Central Middle School History Club: The bus bench will be a functional piece of artwork that will be installed at a bus stop in East Lawrence. The bench will depict images of East Lawrence history and help fill the need for bus benches in the community. Each club member will interview an individual from the neighborhood to inspire the imagery. The project will be unveiled at a potluck dinner in late April.

“Art Box” by Hang 12: The “Art Box” will be similar in concept to a little free library, in which people are encouraged to take and contribute books. However, instead of books, Hang 12, a group of high school artists supported by the Arts Center, will stock the box with two- and three-dimensional artwork and people can take a work and leave one of their own behind. Hang 12 hopes the project will create community connections, inspire creation and build new relationships among artists. Blueprints will be available in the box for others to build their own art box. The project’s progress will be shared via blog posts on the East Ninth Street project website, social media and via email lists.