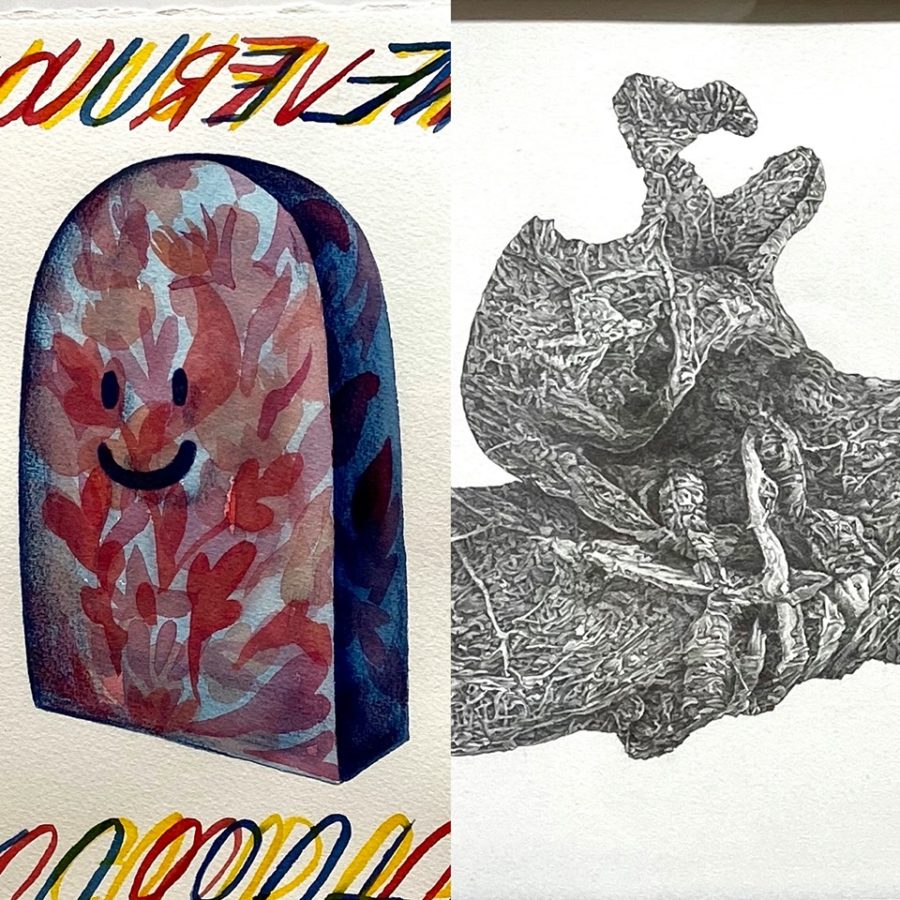 A group of University of Kansas graduate alumni came together to show a more private and less commonly exhibited aspect of their process in the Disegno group show at the Lawrence Arts Center. Though the eight participating artists come from differing backgrounds, they share drawing as a central facet of their art.

For metalsmith Erick Morales Scholz, drawing is a tool that bridges art and science and lets him translate the three-dimensional world into 2D. His three-dimensional drawing of a cluster of organs attempts to envision the lump of humanity as an amorphous set of parts that are more interconnected than they like to admit.

Ruben Castillo, on the other hand, uses drawing to visually explore the familiar. He portrays mostly domestic objects such as pillows, couches, hangers, and plants and elevates them to artistic studies. In bringing two graphite and latex covered pillowcases into this show and mounting them on the wall, Castillo indeed transforms a familiar object, queering everyday space and the viewer’s relationship to it.

For a drawing instructor and a long-time painter like Kyle Goddard, drawing is an act of shape-making, searching for forms and structures that present themselves through process and serendipity. Often pulling from the human form and observations of social tensions, unrest, and confusion for his imagery, Goddard uses his work as a dialog between polarities and spatial distortions.

The meticulously drawn patterns of Myles Dunigan’s work contrasts with Eugene Sarmiento’s vibrant and playful drawings. Both artists are printmakers but in his fabricated landscapes Dunigan delves into the unknown and searches for “something,” while Sarmiento attempts to extract soul and essence from his daily observations. These daily observations–of the swaying trees, the howling–find more and more connections to living objects with the shortest timeline.

Renee Springer’s painting installation and Jessica Belangee’s organic painting both investigate the idea of a place. Belangee made the piece featured in the show while she was gone for an artist residency, using the organic objects she found walking in a jungle close to her studio. Belangee’s work references portions of the landscape through the meditative practice of wandering. Renee Springer also draws her inspiration from the everyday photos she takes while staying in a new place. For this show, she printed personal shots of her life when she was staying in Lawrence as a graduate student. The audience as co-collaborators picked three images and she painted an abstracted combination of the three images within a period of 5-10 minutes. The paintings will be given to the viewers at the show’s conclusion.

Nazanin Amiri Meers, who is also the curator of the show, acquired her MFA in fiber art. Her digital drawing shows a macramé piece she made in the past. She attempts to discover new possibilities of traditional art forms, especially those that are historically designated women’s “craft.”

This group show stresses the importance of drawing in the artists’ practice regardless of the medium, and sheds light on each artist’s visualization and development of ideas. Disegno is on display until October 19th at the Lawrence Arts Center.