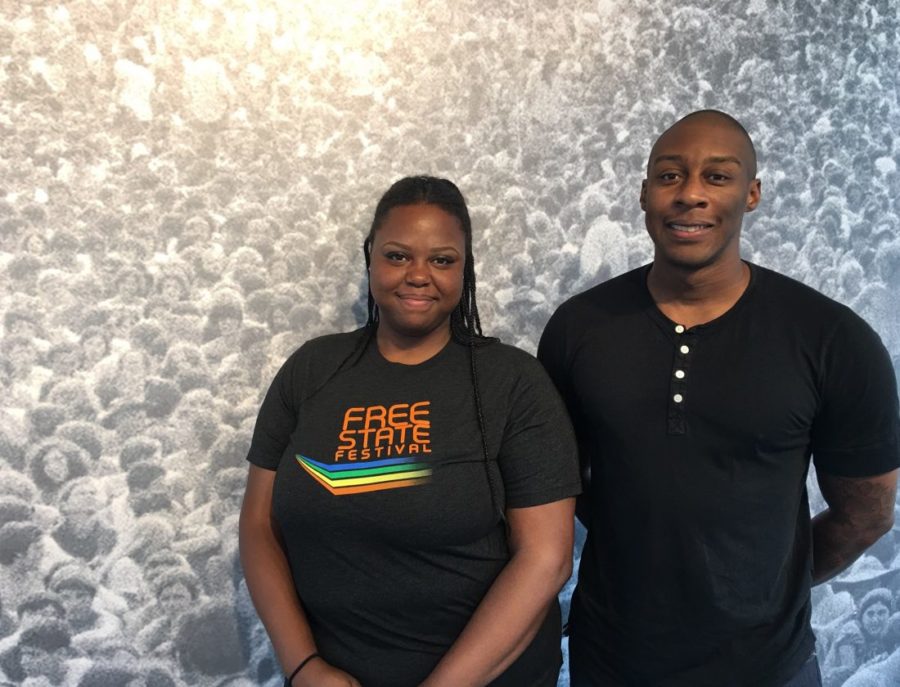 The brand new artists-in-residence at the Lawrence Arts Center were focused on an unimaginative but necessary task Monday: filling out W-4 forms on their first day on the job.

Sculptor Ashlyn Pope and printmaker Dayon Royster had just arrived at the center at 940 New Hampshire St., where they will be spending the coming 12 months creating new pieces of art, as well as teaching classes for the Lawrence community.

“We’re trying to get our bearings here,” said Royster, from Richmond, Va., who only arrived in town Saturday.

Royster hopes to build on the work he was doing while earning an MFA from the University of Iowa, which included silk screens and Xerox transfers as well as creating huge banners.

Pope, who is of African American Gullah descent, hopes to explore the idea of ceramic sweetgrass baskets. At the same time, she wants to rediscover her Gullah roots, which go back to the African Americans who settled in the low country of the South.

“Our family never actually learned the art, but it was a major staple in our culture and a tradition I want to discover and make it more permanent,” Pope said.

She’s also looking forward to connecting with the Lawrence community. She will be teaching a beginning hand-building ceramics class.

“I miss being with people and letting them explore things that are not graded,” said Pope, who recently finished up a teaching assistantship at Pennsylvania State University, where she received an MFA in ceramics.

This is the first time in Lawrence for both artists. Pope is originally from New Jersey and Georgia, and Royster is from Richmond, Va.

This is the 14th year for the residency program. The artists were selected from a pool of more than 60 candidates from around the globe, said Kyla Strid, director of residencies and adult education at the Lawrence Arts Center.

“We always have a strong pool,” said Strid, who was the Lawrence Arts Center’s 2013-2014 ceramics artist-in-residence. Strid said they narrow down the candidates and then do Skype interviews with finalists.

“The interview process helps the best rise to the top,” Strid said.

Pope was looking for a residency that offered interdisciplinary studies and a chance to work with a nonprofit.

“I wanted to get back into a community after being in academia for the past couple of years,” she said. “I have a BFA in ceramics and printmaking and wanted to find a place that would let me do both and find a way to bridge them in my work.”

After being in academia for more than three years, Royster said, he really wanted to get back into the real world.

“This is their reintroduction into the real world,” Strid said.

Strid added that this year’s residents would have their work cut out for them because the previous artists-in-residence, Nate Ditzler and Johanna Winters, worked really hard.