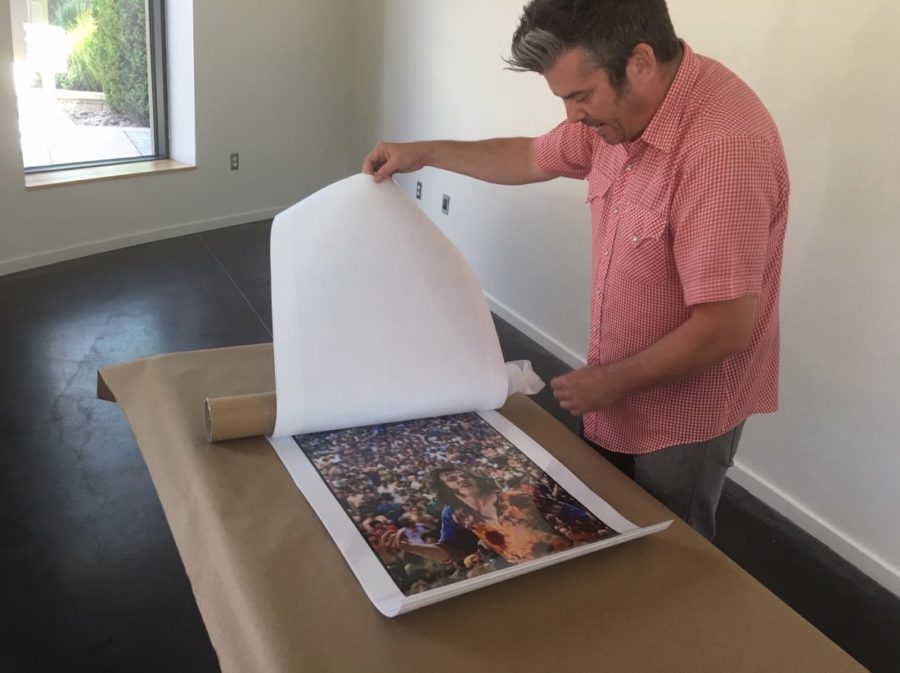 Using an X-Acto knife, Ben Ahlvers very slowly cut through the packaging tape to open the tube of photographs that arrived Monday for a new exhibit at the Lawrence Arts Center.

“It’s a little like surgery,” said Ahlvers, the exhibition program director at the center. He was being extra careful not to cut through to the prints that will be part of the upcoming “Back to the Garden: Photographs of the 1969 Woodstock Festival,” opening Aug. 9 at the center, 940 New Hampshire St.

The exhibit, curated by Ahlvers, celebrates the 50th anniversary of the legendary music festival and includes the work of eight photographers who were on the scene at Max Yasgur’s dairy farm in Bethel, N.Y., on Aug. 15, 1969.

Though the opening is fast approaching, Ahlvers has been working on the project for several years, selecting photos and arranging the programming around the exhibit.

He carefully unrolled photos taken by Elliott Landy. One is of Joe Cocker on stage. During his career, Landy photographed such superstars as Bob Dylan, Janis Joplin and Jimi Hendrix and generally documented the 1960s music scene. But what Ahlvers especially liked about the photo wasn’t the star imagery but the massive crowd behind Cocker.

The exhibit will include 35 images from the eight photographers, several of whom worked for LIFE magazine and Rolling Stone and as official photographers for the festival. The images Ahlvers selected for the exhibit focus mainly on the regular folks who attended the festival. More than 400,000 people made the trek to Bethel over several days.

“The truly unique thing about this happening is that many thought it would be a good idea to show up to a concert under some trying circumstances,” Ahlvers said. “The freeways shut down; people had to walk in because of the traffic. It started raining and didn’t stop. There was not enough food, toilets, or enough shelter. It was a recipe for things to go south pretty quick, but nothing bad happened.”

Among those attending Woodstock was Margaret Weisbrod Morris, the CEO of the Lawrence Arts Center. In August 1969, she was just a 3-month-old baby and came to the event in a backpack. Her mother, Rita Weisbrod, was a sociology professor at Cornell University in Ithaca, N.Y., and brought her students, plus her infant, to Woodstock for the purpose of research. Weisbrod Morris admits that has become a family joke.

“My parents were part of that era,” Weisbrod Morris said. Seeing the photos of the festivalgoers will be like looking back at her childhood.

In developing the exhibit, Ahlvers had a fixed number of photos to choose from.

“The challenging and exciting part was how we could tell the story with the images available and whittling those down to the ones that are in the show,” Ahlvers said.

The exhibit will include background information to help later generations understand the Woodstock phenomenon. For contemporaries of Woodstock, Ahlvers said the show would surely bring back memories of the summer of 1969.

As he worked on the exhibit, several people shared their recollections, including Burdett Loomis, a retired professor of political science at the University of Kansas. Loomis and his wife, Michel Loomis, were on their way to a beach vacation in Long Island, N.Y., driving on I-80 outside of Cleveland, when they picked up a young man hitchhiking.

The hitchhiker told them he was headed to Woodstock and that after that he would take his military physical and go to Vietnam, Loomis said. He rode with them for five hours. Then they dropped him off at the exit for Woodstock on the New York Thruway. By then, the traffic was backed up with cars heading to the festival.

“We knew Woodstock was occurring, and he made it a lot more real,” Loomis said. “We always wondered what happened to that guy; we have thought about him over the years.”

Humanities Kansas awarded a $10,000 grant to the Lawrence Arts Center to help fund the exhibit and the related events including presentations, a film and a concert. For a full schedule of events go online to lawrenceartscenter.org.