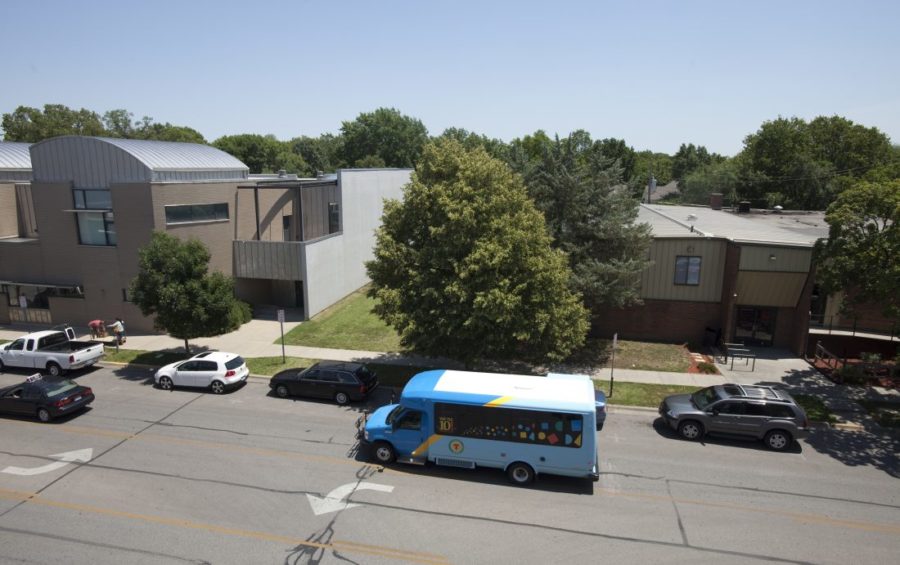 As part of its meeting Tuesday, the Lawrence City Commission will consider a request from the Arts Center to move forward with a 2012 agreement to use a percentage of the revenues from the Tax Increment Financing district at Ninth and New Hampshire streets to help the center purchase The Salvation Army property at 946 New Hampshire St.

The center is currently using the property’s green space, which is directly south of the Arts Center, for children’s programming and would like to maintain and enhance that use by purchasing the property and creating an Arts Commons area. The Arts Commons is envisioned as a “park-like” setting and potential venue for public art exhibitions, theatrical productions, music, film and art-making activities, with the possibility of a new building that would replace The Salvation Army building.

The 2012 agreement needs to be reaffirmed in part because of conflicting deadlines for the Arts Commons project and unclear details regarding how The Salvation Army property will be acquired. If the commission directs city staff to move forward, staff would work with the developers and the Arts Center to create agreements that would come back to the commission for consideration, according to a city staff memo to the commission.

The city created the Ninth and New Hampshire TIF District in 2012 as part of the redevelopment of the area by a group led by Lawrence businessmen Doug Compton and Mike Treanor. The agreement stipulates that the city retains 5% from the developers’ TIF rebates, up to a $900,000 cap, to help purchase The Salvation Army site for the Arts Commons project. The 5% set-aside generated about $86,000 between its initiation in 2015 and the end of the last year, and the city now estimates it will generate about $720,000 over the 20-year agreement, according to the memo.

Originally, there was discussion that the city would purchase The Salvation Army property and be reimbursed with money from the 5% set-aside over the 20-year agreement, according to the memo. However, the memo states that arrangement was not “formally stated” and would have required the city to front the purchase price, which has not been budgeted. When approached by the Arts Center several years ago, the city and Arts Center began discussing a potential agreement for the center to instead provide the upfront money needed to purchase the property and for the city to provide the center 5% of the TIF revenue as reimbursement.

Arts Center CEO Margaret Weisbrod Morris previously told the Journal-World that the center would provide the additional funds needed for the purchase beyond the TIF revenue. Morris said at the time that beyond the priority of preserving the green space, potential long-term plans could include constructing a new building, which could be used for classroom, gallery or studio space. She said the new building would be within the footprint of the current structure and perhaps smaller in order to maintain the open space. Morris presented the proposal to Lawrence Cultural Arts Commission in April, and the commission voted unanimously to recommend the project.

The memo states that any changes the commission would like to see in the development agreements would be subject to negotiation and approval from the developers, but that the two development groups involved expressed a “general willingness” to work with the city and the Arts Center on the changes. If the project doesn’t proceed, the revenue set aside for the project would be available to reimburse the developers up to the established cap of the TIF.

A time frame for the Arts Commons project would also need to be confirmed. The original agreement required the project to begin within five years of the completion of the redevelopments, but because there are multiple agreements and buildings, there are four conflicting dates for the deadline, according to the memo.

The Salvation Army has long owned a property in eastern Lawrence, located on Haskell Avenue between 15th and 19th streets, and the organization is at the very early stages of planning for its relocation.

The Lawrence City Commission will convene at 3 p.m. Tuesday to discuss City Manager Tom Markus’ recommended budget and is scheduled to begin discussing its regular agenda items at 5:45 p.m. The meeting will take place at City Hall, 6 E. Sixth St.