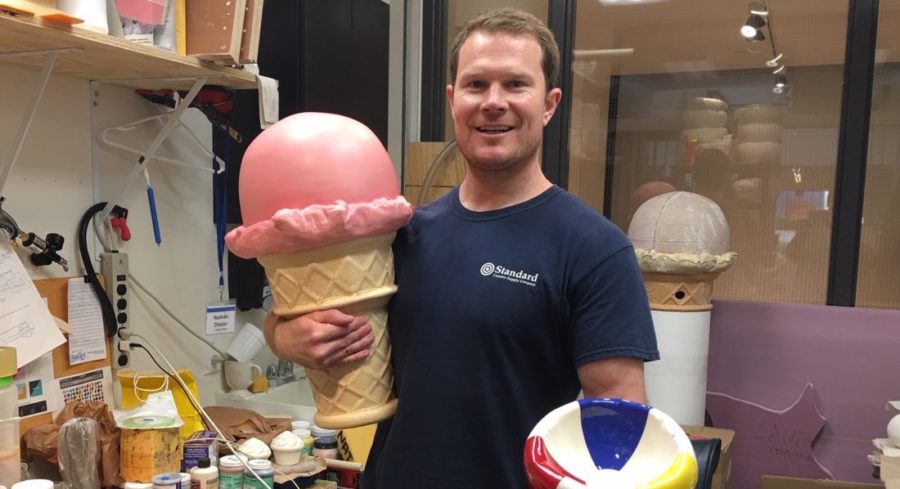 Nate Ditzler’s artwork is influenced by wherever he currently calls home.

For the past year, Ditzler has been the ceramic artist-in-residence at the Lawrence Arts Center. Before coming to Kansas he lived in West Palm Beach, Fla., where he was an artist-in-residence at the Armory Art Center. When his Lawrence residency is finished at the end of July, he’ll leave for a residency at Midwestern State University, in Wichita Falls, Texas, where new experiences will be reflected in his work.

“I keep my work focused on the present,” Ditzler said. “It’s where I am and what I am doing.”

In his cramped studio, upstairs in the Lawrence Arts Center, every surface is covered with objects he has been creating for his upcoming solo exhibition “Midwest Domestic.” Shaped by his experiences in Lawrence, Ditzler describes the show as “a series of existential musings that seek meaning from the seemingly trivial and overlooked moments of everyday life.”

Ditzler has created ceramic items such as a half-inflated beach ball, a large pencil, a skateboard, multiple red wagons and wheels, cupcakes and ice cream cones and other whimsical objects that are all part of different art installations.

Each piece of art begins with a concept that he must decide how exactly to realize. Perhaps he’ll use a combination of handmade and cast ceramic forms, or fabricate mixed media elements or modify objects he has found.

He holds up a large ice cream cone made from insulation foam. It’s part of an installation he calls “Planning Ahead,” influenced by his time in Lawrence.

“Life has become so dictated by the weather since I moved to Kansas,” he said. So he got the idea to make an installation that will look like an extended weather forecast. There will be several days of clouds, followed by an ice cream cone.

People will take whatever they want out of his work, he said.

The 37-year-old Ditzler grew up in Oahu, Hawaii, spending most of his time in the water.

“You stay in the water and out of trouble growing up in Hawaii,” he said.

It was while studying for an undergraduate degree in cultural anthropology at the University of Hawaii that he became interested in pottery.

“It was during that time I found ceramics from all the cultures I had traveled and studied and I found a consistent common denominator for cultural expression, whether it was a fertility figure from thousands of years ago or funerary figures or pots, ceramics kept showing up and taught us about these different cultures and I was fascinated,” he said. “It was a conduit for expression in all these different cultures, and I thought I would give it a try.”

At first, he created functional and artistic pottery, but his interest kept shifting. He moved toward sculpture and now is making installation-based sculptural art.

While he was earning his Master of Fine Arts degree at West Virginia University, he spent a semester studying in Jingdezhen, China, known as “the porcelain capital of the world.”

Ditzler thinks that one of the overarching principles in his work is finding the things that bring people together and the viewer into his work.

“I am interested in making the work accessible, not just to people who have an art education,” Ditzler said. “I hope there is something in it for everyone, and I try to be conscious of that when making it.”

As important as it is to celebrate diversity and uniqueness, Ditzler said, he’s interested in the things that join people together.

“I think there is more that connects us than divides us,” he said.

Ditzler tries to keep his work lighthearted. He often uses a ceramic form he calls an “amorphous blob.”

Nate Ditzler, the ceramic artist-in-residence at the Lawrence Arts Center, tries to keep his work lighthearted. He often uses a ceramic form he calls an “amorphous blob,” which will be included in his solo exhibition, which opens Friday, June 28, 2019, at the arts center.

Looking like a cartoon character, it’s as a surrogate, he said, for the self investigating the meaning of everyday events.

Ditzler appreciates the different perspective his many blobs take. One installation will have a blob on a ceramic skateboard, knocking down a hundred yellow cones, rushing to get to one cupcake on a pedestal. That piece he has titled “Consequences.”

“Humor allows us to have a second take on something,” Ditzler said. “It adds another dimension to the work. Looking at a situation through a different lens, art offers a different perspective.”

His work, which he describes as simplistic playfulness, will be attractive to children.

He’s a little concerned they may want to play with the ceramic wagons or the big ice cream cone.

“The work is fun looking, so I hope they don’t get too excited; it could be dangerous,” he said.

As Ditzler was describing the different pieces that come together in the exhibition, Jennifer Doores, a sculpting instructor at the arts center, stopped to admire one of the pieces waiting to be set up in the gallery. She said she was impressed with the multimedia aspects of the work.

Nate Ditzler, the ceramic artist-in-residence, discusses one of his installations with Jennifer Doores, a sculpting instructor at the Lawrence Arts Center, on June 20, 2019.

“His work reflects consumerism, and a lot of humor, and is very accessible and easily related to every day,” Doores said.

Ditzler’s partner, Laura Koneche, is also a studio artist from Hawaii and is here with him in Lawrence.

“She helps me quite a bit in figuring things out,” he said.

With the creations finished, Ditzler is focused on getting installations set up. The opening reception will be at 5 p.m. Friday. The show will remain up until 9 p.m. July 20 at the Lawrence Arts Center, 940 New Hampshire St. 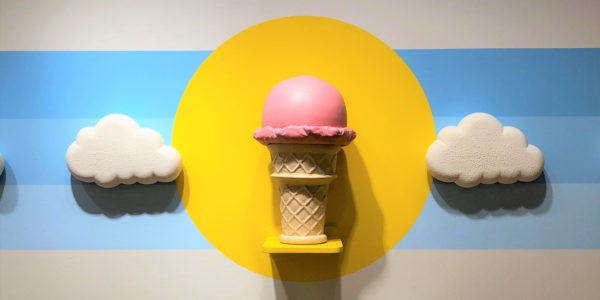 Nate’s work seeks meaning from the seemingly trivial and overlooked moments of everyday life. He … [more] 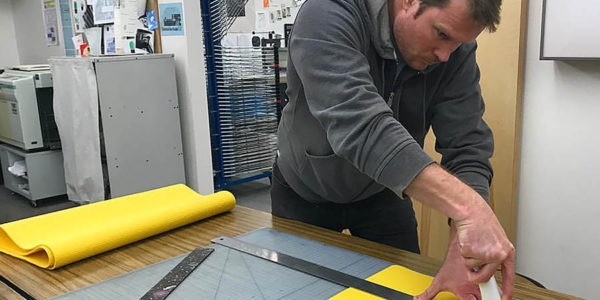 Nate Ditzler grew up on the island of O´ahu, Hawai´i. He holds a Bachelor of … [more]