Rudi Monson’s daughter is currently in her second year of preschool at the Lawrence Arts Center. Her older daughter spent three years in the Arts Center’s Early Childhood Education program, including kindergarten. Rudi holds a bachelor’s degree in Elementary/Middle School Education from the University of Kansas, and a master’s in Curriculum and Instruction with ESL emphasis from Concordia University in Chicago. She taught Language Arts and Math in middle school in Chicago for 12 years. Her experience as both an educator and parent gives her a unique perspective on Early Childhood programming at the Lawrence Arts Center.

This is the gift of Ms. Amanda Clark. Her goals for each child? To teach them how to tell their own stories, to make their own music, to find their own beat.

Who has time for the small voices of our world? Who listens to them? Amanda and all the teachers at the Arts Center are the ones who say, “I want to hear your story.”

It didn’t take long to decide that in this blog series, we had to meet some of the greatest celebrities of the Lawrence Arts Center Early Education program. You’ve heard about them. Your kids talk about them. Who are they? They’re like unicorns, existing outside our pickups and drop-offs, and yet so present in our children’s experience. Who are these mystical, magical spirits who bring joy and wonder to our kids? They are–drumroll, please–THE AMANDAS!

Woohoo! I observed Amanda Day! You and I both know that this is a pretty sacred day in the world of our children. There’s stiff competition with Pajama Day, gingerbread house extravaganza, baby chick countdown, etc. However, “Amanda Day” is always announced in our home with reverence. We are told if it was an Amanda day even before she tells us what the snack was for the day.

The Amandas are even more incredible than I could have imagined. So incredible, in fact, that I have to write two posts, one dedicated to each of them.  Because even though their work overlaps in some ways, the power of each experience stands alone.

This post is about Amanda Clark, who works with students on music and theater in the black box theater downstairs. She is also known as Music Amanda, Downstairs Amanda, or Glasses Amanda. She teaches our kids to imagine.

Who doesn’t love a good story? Why are we, as humans, drawn to the art of storytelling? I believe it’s because we each have our own stories to tell. And there’s something wonderful happening in childhood, when we are so hungry to hear stories. Nursery rhymes, fairy tales, reading the same book over and over again, retelling favorite books by talking through the pictures, the hunger shows up in many ways. Perhaps it’s because, somewhere in the minds of our 3, 4, and 5 year-old selves, we recognize that if these characters have a story, that means each person in the world has a story. Which means I have a story, and it can be anything I want it to be.

Educators recognize that stories are the beginning of our literate lives. They know that reading and writing begin long before a child picks up a book or a pencil. It all begins with a story and a vibrant imagination. 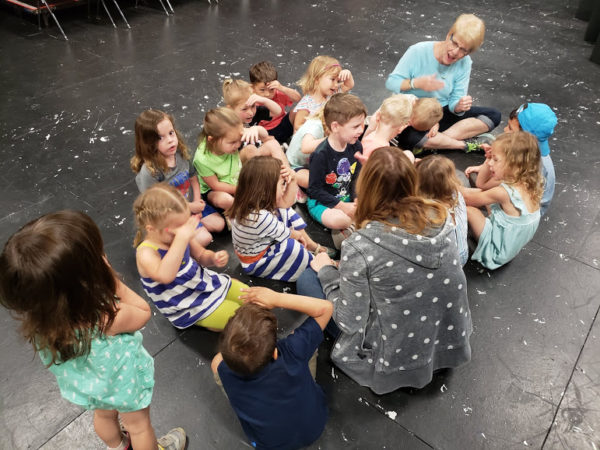 Amanda Clark takes our children on a journey in the 20-30 minutes she spends with them each week. They become snakes, mice, bees, snails, birds. They use their voices and bodies in new ways. And within that, without even realizing it, they learn literacy and music. I wish you could have seen the Bear Hunt! (Remember that one?  “We’re going on a bear hunt, we’re going to catch a big one…”) It was wild and loud and silly and fun and quiet and wonderful. Some kids were the hunters, some were the grass, others the mud, the trees, the cave, some even the Bear, and then, of course, some were the audience. Most of them switched roles several times throughout the story, jumping up from lying down as the squishy mud, to waving their arms as long grass, and then tiptoeing gently as the hunters. In this way, they read the story from so many different perspectives. Think about how deep that reading is, to read a story from each character’s point of view.

In fact, this activity engages students with several Common Core reading and writing standards. (I’m going to quote them now, feel free to skim when this gets boring.)

One of the anchor writing standards for K-12 states, “Students will develop and strengthen writing as needed by planning, revising, editing, rewriting, or trying a new approach.” This is the goal by the end of 12th grade. But here in the Bear Hunt, as each child tests out how to be the grass, how to be the bear, and so on, they are beginning to build the skills necessary to achieve this standard.

Before Amanda Clark even began the story with the children, they spent time on the rug together recalling the details of the story, which they’ve clearly worked with previously. She asked, Who or what were the characters? Where did they go? What did it look like? What happened next?

As they were invited to act it out, the children began to tell the story with Amanda. And for those students who would rather listen than engage in the boisterous storytelling, there was a spot on the rug to sit and be the audience. Because, as always, the teachers at this school recognize that we can experience and demonstrate understanding in a multitude of ways, one of which is through observation.

Those sweet little voices warm up with Amanda by singing songs to which they all know both words and actions. Again, inviting participation by singing or moving or both. Scales were included in this portion of the lesson. You know, the Do Re Mi kind. They sang the scales as cats, then dogs, then fish, then Tyrannosaurus Rexes. (Yes, it was as cute as you think it was.) Later, Amanda told me that one of the musical goals of children aged 0-5 is tonal competence. This is the ability to hear a note and sing it back, to recognize a note as high or low and where on the scale it falls, and to know that a middle C and a high C are the same note. She spends a lot of time on the 5 notes between Do and So. Children’s brains work on that range, and all the songs are in that range. She starts with three notes, then over time builds to 5, then finally to all 8 notes. With the four-year-olds, they even practiced singing the notes (as T rexes) both up and down the scale. 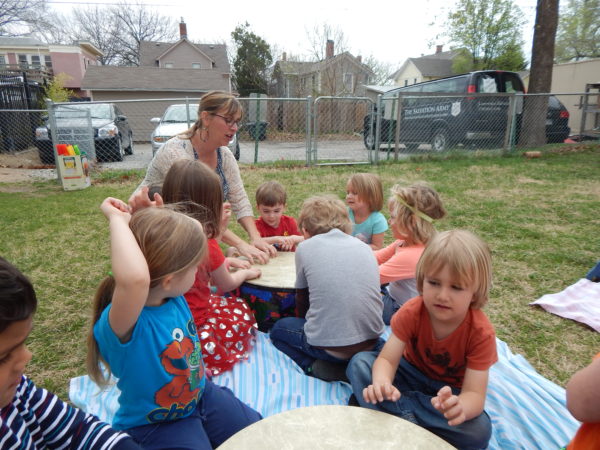 Next came the Gathering Drums. Beautiful, giant, low, round Gathering Drums. There was community, there was exploration, there was math, there was music, there was science–it was awesome! Groups of four huddled around each drum naming the shape of the drum, explaining to each other that “big drums make big noise.” In the same way that our children explore many forms of visual art in the classrooms, with Ms. Amanda, they explored sound. To the beat of a song they sang together, they tapped the drum. What about if we try scratching? Knocking? Banging? Then, they turned the drum over and tried playing it. Why is the sound different? There’s no echo! No space! The sound goes into the ground and can’t bounce up! Turn it back over and play a beat together. Soon, Ms. Amanda introduced a second beat into the song without saying a word. Suddenly, some of the children followed her beat, giggling at the layers of sound in the song they were playing, in the music they were creating together.

In talking with Amanda after the observation, she told me about the link between music and literacy.  (Oh my goodness, do a Google search. There is SO much research out there on this.) “The shortest story is a nursery rhyme. It has a beginning, middle, and end. So, we start there.” She works with the children to build nursery rhymes using song and movement. Soon, this leads to stories, such as the Bear Hunt. Stories often have rhythm and repetition, making it easy to repeat the story often as kids can try out different parts and emotions, explore cause and effect. Eventually, stories lead to fairy tales and then fairy tales lead to unscripted stories that the kids can act out as she tells it, improv style. And before you know it, they are creating their own stories.

“Wow, that’s an impressive path. Is this the scope and sequence from preschool through kindergarten then?”

“No, this is one semester.”

This is the gift of Ms. Amanda Clark. Her goals for each child? To teach them how to tell their own stories, to make their own music, to find their own beat.

Who has time for the small voices of our world? Who listens to them? Amanda and all the teachers at the Arts Center are the ones who say, “I want to hear your story.”