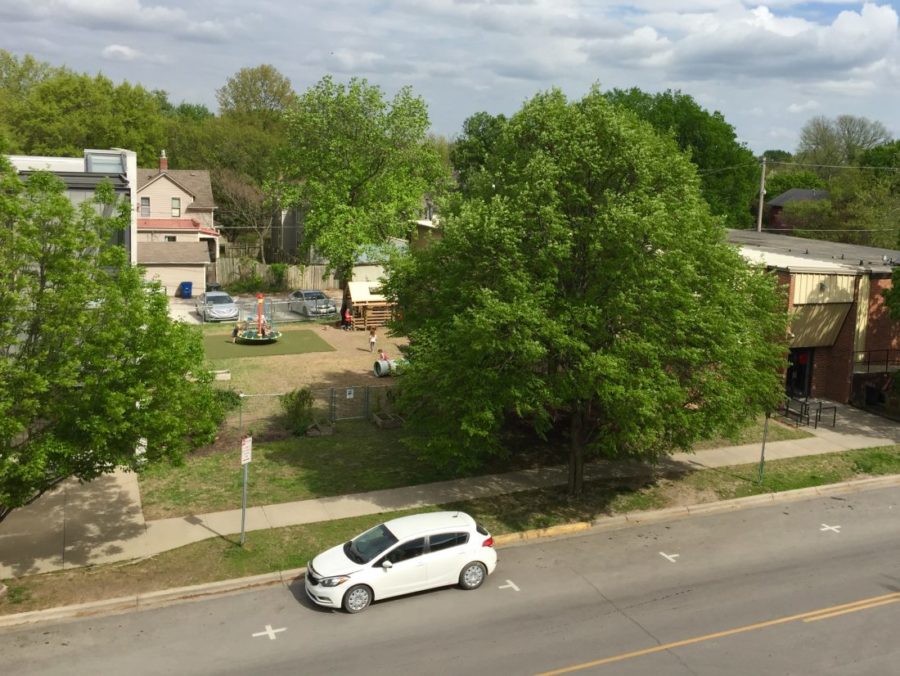 A prime piece of downtown real estate will soon be available, and Lawrence Arts Center leaders are hoping that special tax revenue can help the center purchase the site.

The Arts Center is requesting that city leaders and developers move forward with a 2012 agreement to use a percentage of the revenues from the Tax Increment Financing district at Ninth and New Hampshire streets to help the center purchase the Salvation Army property at 946 New Hampshire St. The center is currently using the property’s green space, which is directly south of the Arts Center, for children’s programming and would like to maintain and enhance that use by purchasing the property and creating an Arts Commons area.

Arts Center CEO Margaret Weisbrod Morris said the center doesn’t want to see the green space eliminated should the property be redeveloped and that preserving and enhancing that space would benefit the community at large.

“What we want to do is create a healthy, outdoor creative space,” Morris said. “And I think that’s part of having a healthy, vibrant block and downtown area.”

The Arts Commons is envisioned as a “park-like” setting and potential venue for public art exhibitions, theatrical productions, music, film and art-making activities. Morris said that beyond the priority of preserving the green space, potential long-term plans could include constructing a new building, which could be used for classroom, gallery or studio space. She said the new building would be within the footprint of the current structure and perhaps smaller, in order to maintain the open space.

However, there are conflicting deadlines for the project, some of which have passed, because it involves multiple redevelopment agreements, according to information Assistant City Manager Diane Stoddard provided the Journal-World. In order for the project to move forward, the Arts Center needs both the Lawrence City Commission and the development group to approve and clarify the agreement as it relates to the Arts Commons project.

The Ninth and New Hampshire TIF District was created in 2012 as part of the redevelopment of the area by a group led by Lawrence businessmen Doug Compton and Mike Treanor. The redevelopment agreement stipulates that the city retains 5% from the developers’ TIF rebates to help purchase the Salvation Army site for the Arts Commons project. If the project wasn’t initiated by a certain date, the plan calls for the TIF revenues allocated for that project to instead be provided toward the developers’ TIF reimbursements for infrastructure costs.

Regarding the needed approvals, Stoddard said the City Commission would need to approve an agreement with the Arts Center requiring it to purchase the property and allowing for the transfer of the 5% over time. The amount of money the Arts Commons project could receive from the TIF would be capped at $900,000. Also, Stoddard said the developers would need to agree to amendments to the respective agreements to clarify the dates of the agreement.

Compton told the Journal-World that the development group is open to reestablishing the agreement that set aside 5 percent of the TIF revenue for the Arts Commons project.

“We would be very much interested in reopening those conversations,” Compton said. “We felt like it was a good deal for us and the neighborhood back in 2012.”

At the time of the original agreement, the city projected that the 5% set-aside would generate about $520,000 over 20 years, though those projections have since increased. Morris said the Arts Center and the Salvation Army are close to finalizing a price for the property and that the center would provide the additional funds needed for the purchase beyond the TIF revenue.

According to the city’s 2018 draft economic development report, the TIF began generating reimbursements in 2015. As of the end of 2018, the city had retained about $86,000 of the reimbursable sales and property revenues for the Arts Commons project via the 5% set-aside. In 2018 alone, the TIF generated about $680,000 in reimbursements for the developers.

The 5% set-aside is now projected to generate more than $700,000 for the Arts Commons project over the 20-year timespan of the TIF, according to Stoddard. However, Stoddard said it is important to note that actual TIF revenues will depend on private business operations that occur within the district. For example, she said the addition or loss of a retailer within the district would have a substantial impact on TIF revenues.

Stoddard said that if the project doesn’t proceed, the revenue set aside for the project would be available to reimburse the developers up to the established cap of the TIF. She said if the developer’s cap is met ahead of the expiration of the TIF, it means that the TIF district will likely be closed out at that time.

For its part, the Salvation Army has its own plans in the works. The social service organization has long owned a property in East Lawrence, located on Haskell Avenue between 15th and 19th streets, and Salvation Army Lieutenant Andy Wheeler said the organization is at the very early stages of planning for its relocation.

“We are working hard with our partners, with the City of Lawrence, the Arts Center and neighbors in the area,” Wheeler said. “We are very glad for that partnership and we’re glad for the community’s acceptance of this process.”

Morris said the Arts Center plans to bring the plan for the Arts Commons to the Lawrence City Commission for discussion as part of its meeting June 18.