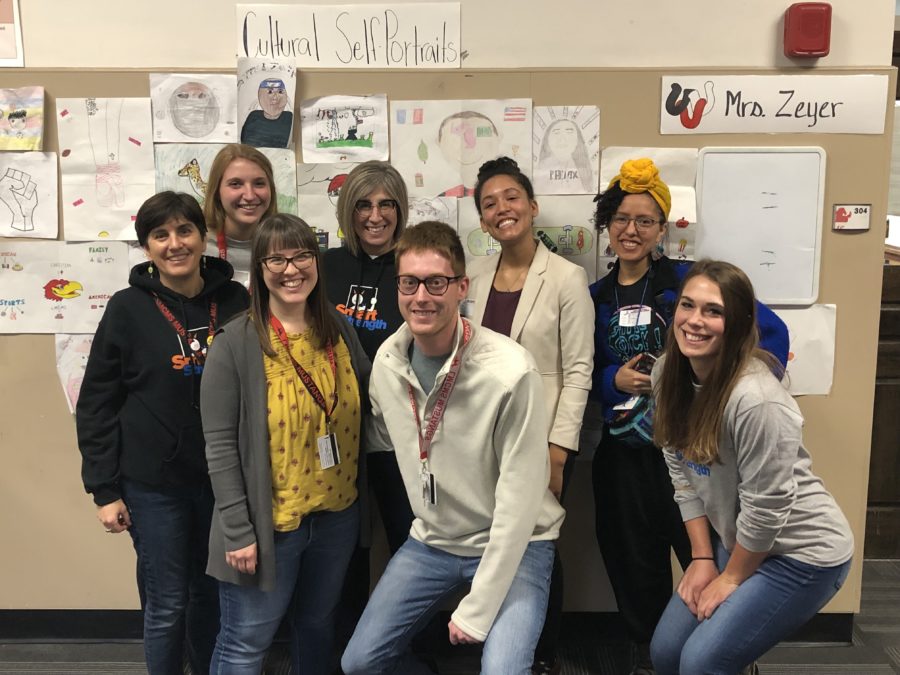 In memory of their daughter Rebecca, a gifted poet and lifelong writer, Dick and Diane Zinn support a Writer in Residence each year at Liberty Memorial Central Middle School, connecting 7th grade students with inspiring regional authors, filmmakers, and playwrights. For the past five years, the Lawrence Arts Center has partnered with the project, finding artists to collaborate with students for expansive creative writing projects ranging from six-word memoirs mobilized on screen printed t-shirts, to the performance of original one-act plays, and more.

This year, educators Jackie Stafford, Brooke Zeyer, Adrian McAfee, and Carol Souders will work with poets Mercedes Lucero and Alex Kimball Williams to undertake an exploration of verse poetry novels and novellas within their classrooms. Working through the spring, students will produce personal chapbooks of writing to be shared on April 28th at the Lawrence Arts Center’s 2019 Poetry Fair.

Kimball Williams is the recipient of the 2018 MLK Dreamer’s award, an annual, local award given to a community member for spreading a revolutionary vision & change in the community. They are also depicted in the Women of Color Mural recently completed on the Lawrence Public Library. The Langston Hughes mural, also completed in 2018, hosted Kimball Williams as their guest speaker for the mural’s opening.

is the author of Stereometry  (2018, Another New Calligraphy), an interactive poetic curriculum that uses arithmetic’s orderliness to manage a time filled with loss and near loss. She is also the author of the chapbook In the Garden of Broken Things (2016, Flutter Press), which includes “The Possible Causes of Your Suffering,” a finalist for Glimmer Train’s “Very Short Fiction” Award. She is the winner of the 2017 Langston Hughes Creative Writing Award for Poetry and has received several Pushcart Prize nominations. In 2017, she received honors from KC Studio, a lifestyle magazine dedicated to art and culture in Kansas City. Her work has been featured on The Project on the History of Black Writing and published widely including in New Orleans Review, Puerto del Sol, Fourteen Hills, Paper Darts, The Chicago Tribune’s Printers Row Journal, The Pinch, and Heavy Feather Review.

Are you as excited as we are for the project? Follow along with the residents’ reading list:

In the Garden of Broken Things by Mercedes Lucero

All the Broken Pieces by Ann E. Burg

Forget Me Not by Ellie Terry