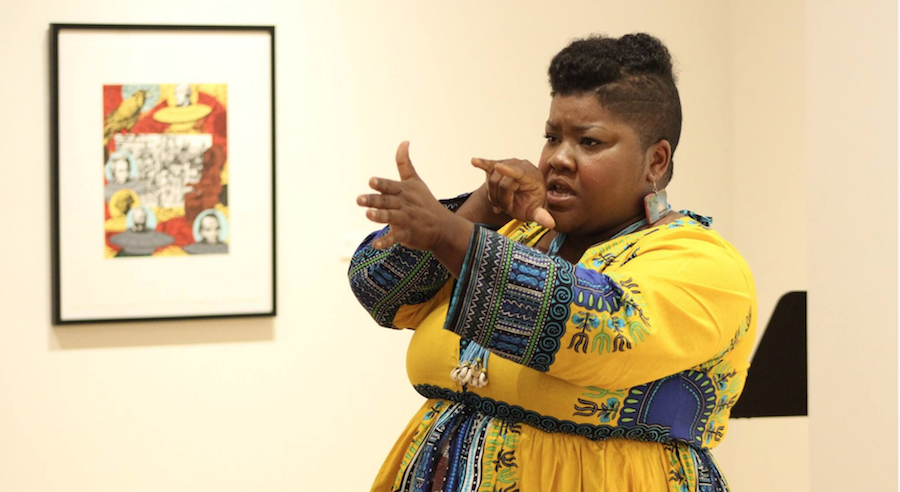 Last summer, we exhibited the work of mother-daughter duo Sandra Keat German and Vanessa German in an exhibition called My Mother was the First REAL Thug I Knew. I was first introduced to Vanessa’s work at the Crystal Bridges Museum in Bentonville, Arkansas. It’s one of the few times I made a point to return to the museum the next day just to see the work once more. A couple of years later, I invited her to participate in a group exhibition at the Lawrence Arts Center and she accepted – sending three pieces to the group exhibition, Platform, timed to sync with the 2016 presidential election.

As a part of the exhibition, Vanessa visited Lawrence, and performed in our gallery. Her passionate, visionary, powerful performance was unlike anything I’ve ever witnessed – a genuine and captivating combination of fierce confidence and fragility. It was great to get to know her a bit more, shop at the Antique Mall, and have pie at Ladybird Diner. We talked about the upcoming 2016 election. We also talked about quilts. Her mother was a quilter, and taught Vanessa much about creativity.

In March of 2018, I visited Vanessa in Pittsburgh, Pennsylvania to look at her newest work and talk about the possibility of showing her work with her mother’s quilts. The idea of having these pieces on display during the National African American Quilt Convention was exciting, but Vanessa was mostly moved by the idea of showing alongside her mother. Vanessa’s trajectory as an artist has taken off. Sadly, her mother passed away and didn’t have the chance to see much of her daughter’s successes. Sandra taught Vanessa and her siblings to make things, to question authority, to speak up, to show up, to dance, to sing, to laugh, to eat well, and to fight for what is right.

Vanessa cites her mother, Sandra Keat German, as the cornerstone of her approach as a maker. I’m very happy to have participated in bringing this mother and daughter’s art into the same space. I’m also very happy that the Nelson-Atkins Museum of Art acquired one of Vanessa’s pieces from her exhibition at the Lawrence Arts Center for their permanent collection.