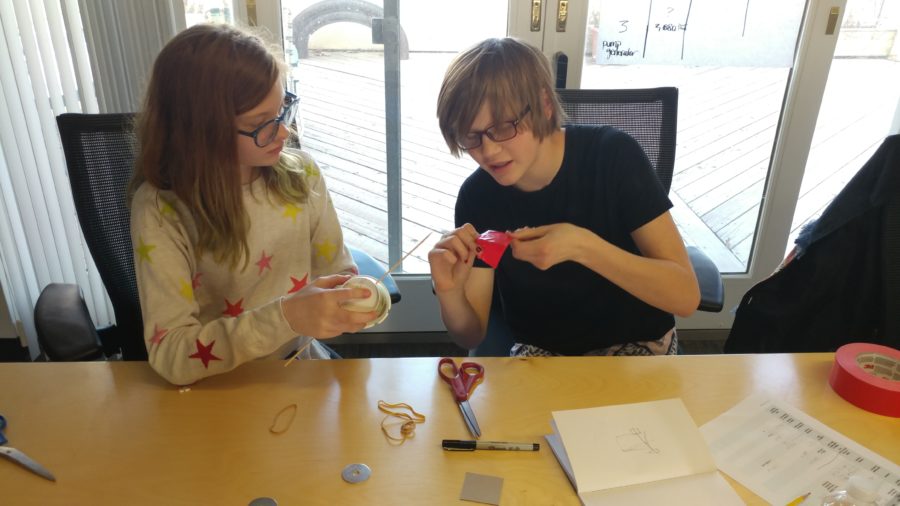 I remember when Lauri invented the talking crosswalk, though I forget what she called it. This was still several years before accessible pedestrian signals were omnipresent. Lauri was in fifth grade when I was in fourth, and that year at the school Invention Fair she came out with an idea for a crosswalk sign that would tell blind or visually disabled pedestrians when to cross. My own invention—a mesh drinkware lid to prevent imbibers from being hit in the face by ice cubes—seemed frivolous and overly complicated by comparison. All I did was reinvent the sippy cup. Lauri’s invention was a legitimate response to a service gap.

It was clearly time, because the very next year, Los Angeles unveiled their first talking crosswalk signal. The installation coincided with the national convention of the American Council of the Blind, and the feedback in the Los Angeles Times was rapturous. Previous accessible pedestrian signals in Los Angeles chirped or cooed; this was the first to do what Lauri suggested. Of course, the companies who developed accessible signals didn’t steal Lauri’s idea—they had been working long before Lauri got the Invention Fair flyer—but that didn’t mean Lauri didn’t independently invent the talking crosswalk. In a life running parallel to the lives of those developers, slightly too young and too removed to collaborate, Lauri identified a problem and turned her mind to fixing it.

A lot has been written about women in STEM, that catchall acronym for science, technology, engineering, and math. Women are underrepresented in STEM fields, which begins with their underrepresentation in STEM classrooms. I wonder what Lauri would have made of a program like Inventor Grrls at the Lawrence Arts Center, a community-based, out-of-school time maker program for 1st-5th grade girls. I suspect she would have liked it. Each Inventor Grrls meeting includes a team challenge, a short PowerPoint focusing on women in STEM, and time to reflect by drawing or writing in sketchbooks. Over the past semester, Inventor Grrls visited and created at places like the Lawrence Makerspace and Bowersock Mills & Power Co., Lawrence’s hydropower dam. In advance of these visits, the Inventors embarked on explorations in the classroom. For instance, in preparation for their Bowersock visit, Inventors learned about hydropower dams and worked together to design a quick hydro-paddle powered prototype.

Elsewhere in Lawrence, a local chapter of Girls Who Code has gotten off the ground. Rheanna Walton, who once participated in a winning all-female FIRST Lego League Robotics team, is now a member of Team STEAM Robotics, the Lawrence school district robotics team. While this is a moment of unprecedented access for women in STEAM, Walton explains that there are still hurdles to be cleared. “I think women in the STEAM [science, technology, engineering, art, and math] field, particularly STEM fields, face some discrimination from their male peers. Women often feel forced to prove themselves before they are respected by their peers, which is not generally true of men in these fields. Throughout their careers, women in these fields are often more harshly judged than their male counterparts. Additionally, it can be uncomfortable or even discouraging being of only a few women in an environment filled with men. These fields are often seen as the work of men, which can make it difficult for young girls to break into the field, but I believe that times are changing.”

Times change, in part, when activities like Inventor Grrls and Team STEAM Robotics are available, and when supportive coalitions are built. “Though being a girl in STEAM activities can sometimes be discouraging, it is very rewarding work when you have the final product,” Walton says. “In my experience, I have been able to use my leadership position to be a force for positive change in my organization.”

Olivia Hernández, Inventor Grrls facilitator, concurs. “The most obvious statistical challenges [to women in STEM] exist at the collegiate level and even more so at the professional level. I believe strengthening bonds between women helps their ability to problem solve with each other and strengthening their resolve and determination not to give up in the face of failure but to work through it.” The Inventor Grrls semester concluded with a Symposium. “The symposium was their first experience presenting something professionally,” says Hernández. “The students resolved and developed projects accompanied by a public presentation, which can be a huge milestone particularly for a young woman facing a crowd of peers. The relationships they created with each other were beautiful to see and a paramount reason for them to keep coming back. The program is not only about self-improvement, but community improvement.”

The Inventor Grrls Symposium felt a lot like the Invention Fairs of my youth, with one key difference. Rather than present a tri-fold poster board covered with descriptions of what they would do, given the opportunity, these Inventors had something complete and ready to show for their weeks of investigation and reflection. This was possible because of their drive, openness, and curiosity, as well as the guidance they received. “Ms. Olivia offered a lot of resources and help that I wouldn’t have by myself,” Darby, a participant, explained. “I had a lot of fun.”

“STEM process and the artistic process are creative problem-solving. There is a nuanced correlation between the two investigative pathways,” Hernández explains. Breaking down barriers between fields contributes to breaking down our assumptions about what success in those fields looks like. Moving from STEM to STEAM is an unqualified good. The world and its workings are incredibly multifaceted; we, too, must be multifaceted to take it on.

Lauri, by the way, is still making her mark. She took hold of opportunities available to her and made her way to college, majoring in math and economics. She went on to get an MBA. Now she is the co-founder of a Silicon Valley HR app. Clearly, at some point, she internalized a version of the advice Rheanne Walton has for aspiring STEAM professionals. “Stick with it! It can be so much fun and no one should be afraid to pursue what they’re interested in.”

For more ideas to mull over, read, “How To Inspire More Young Women To Enter STEM In 2018” in Forbes Magazine.