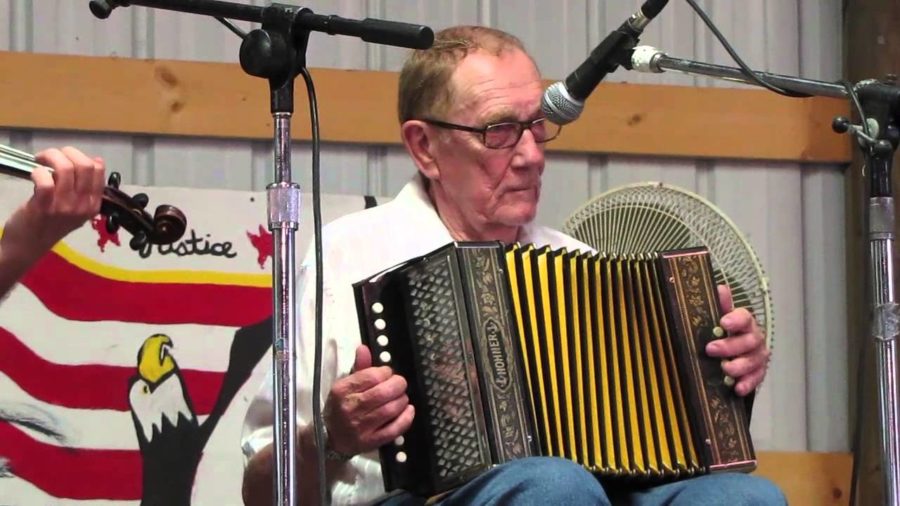 Dwight Lamb is a 2017 National Endowment for the Arts Heritage Fellow with more than 60 years of experience in music collection, recording, preservation, and teaching. He has been a signature performer at the Smithsonian Folklife Festival and the Iowa Folklife Festival. Howard Rains and Tricia Spencer are honored to have him join them here on the Arts Center MainStage.

A decade ago, Kristian Bugge, a Danish fiddler, and Mette Katherine Jensen, a Danish accordionist, were attending a music festival in northern Minnesota when they heard familiar music coming from Dwight Lamb and his two-button accordion. The musicians recognized that the tunes were Danish in origin, but had a difficult time putting a finger on their pedigree. Dwight told them he was simply playing the music he’d been taught by his father and grandfather, who had immigrated from Denmark to Iowa in 1893. Genealogical research on the tunes revealed that Dwight was playing songs extinct in Denmark for years, and the CD Dwight had released in 1999 was the last bastion of this particular style of music. In the years to follow, Dwight would travel to Denmark and perform this music he grew up playing for sold out auditoriums.

The influence Lamb has had on the Danish folk music scene cannot be overstated. In the time since the reintroduction of Lamb’s music, Danish folk musicians have been adopting and playing the style once extinct from their native country. More and more, dance halls and auditoriums around Denmark are being filled with Dwight’s tunes, as well as people dancing to them. Songs for a time played only by Dwight and his father in their living room have become a staple in a Danish folk renaissance.

From playing at a Scandinavian folk festival in Minnesota to touring around Denmark, Dwight Lamb has just been playing the music that he grew up on – and changing a country’s music scene while he does it.

Don’t miss this opportunity to experience the music performed live by this very special folk musician, Dwight Lamb, at the Lawrence Arts Center on Saturday, April 21 in the main theater. Tickets are on sale now online and at the box office!