The Lawrence Arts Center is pleased to announce we were awarded a grant from International Fine Print Dealers Association to bring in Philadelphia-based artist Dennis McNett to create an original work that will be included in the Art Tougeau parade. Members of the community are invited to work with Dennis to learn about how printmaking can be used in sculpture and performance.

Here is a description of the project Dennis will be building for the Art Tougeau parade on May 27th:

“After reading the history of Lawrence, I decided on creating a Phoenix for this project. The mythological bird would rise from the ashes of its predecessor; live it’s life and then burn to ashes again. This could be viewed as a resurrection, renewal or a new chapter of sorts. Native American tribes prior to western expansion prominently populated the area of the plains.  That Phoenix burst into flames and arose as Lawrence Kansas.  After the massacre by southern sympathizing Missourians in 1863 which left the city a smoldering ruin, the city adopted the motto ‘From Ashes to Immortality.’ It quickly rebuilt only to survive the floods of 1903, 1951 and 1953.  Lawrence is a phoenix rising, falling and changing.” – Dennis McNett

If you are interested in working with Dennis on May 25th and 26th, please contact our Print Studio Manager, Tonja Torgerson, at tonja@lawrenceartscenter.org for more information. 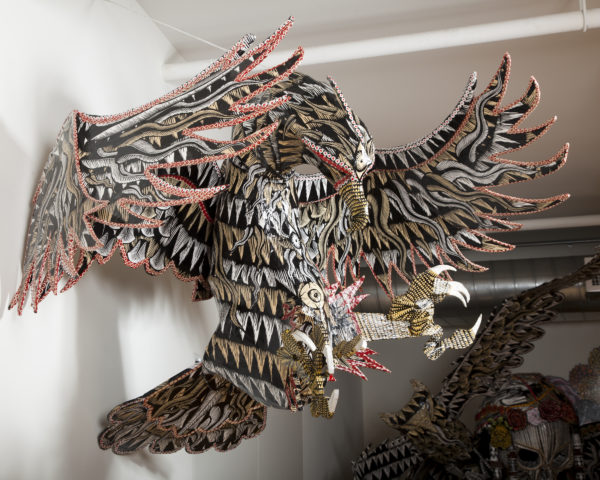