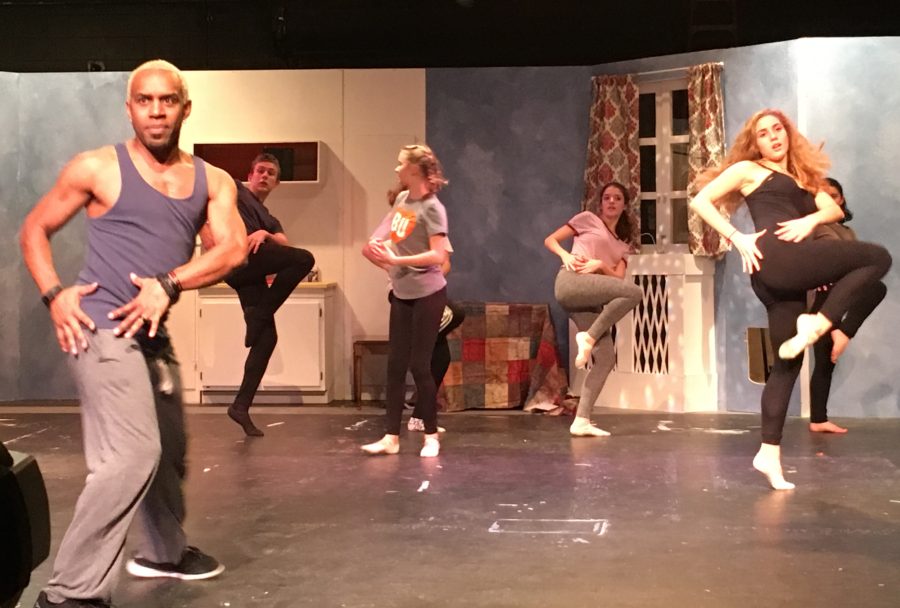 Goals: Show everyone they can dance, Help everyone in a cast find their unique role and purpose in bringing a show to life

For a musical as dance focused as Billy Elliot, the choreographer is a vital member of the production team. Marc Wayne, our guest choreographer for the show, brings not only excellent choreography, but also humor, energy, and a strong concept of how the ensemble works together.

Just like Billy started his dance career as a boxer, Marc started moving as a young martial arts student with his dad. His sister danced, but he was more interested in visual art. Eventually, they traded places. He became the dancer, while his sister went into graphic art. Contrary to Billy, who hid his dance from his parents, Marc’s family was very supportive. His mom took him to competitions around the country and gave him continuous support.

Marc has credits as a dancer, choreographer, director, and writer. In November he wrote and produced a play called The Toymaker and Me. “At this stage in my life, I’m looking more into creating, writing, choreographing, directing, and just inspiring young people to go for their dreams,” Marc shared. As a kid, Marc longed to be in the middle of where dreams are made, and now, that is where he is.

Watching Marc laugh with the cast as he teaches them choreography and congratulate dancers after they improve their form, it is evident Marc loves what he does. Marc explained, “I love working with people, I love seeing the light go on, and I love what I do because I can make anybody dance.” He acknowledges that to what degree people can dance may vary, but insists that everyone can dance because “We’re created to move, we move in rhythm, the seasons are in rhythm, everything is in rhythm.”

One technique he sometimes employs to explain different ideas in dance is referencing cartoons, particularly Bugs Bunny. Marc appreciates Bugs Bunny’s musical theatre side, “He could act, sing, dance, he was classy, he played the fool, he did everything.” Bugs Bunny and many dance greats inspired Marc, but he also emphasized the importance of his teachers and collaborators in shaping him as a dancer.

As Marc envisions Billy Elliot coming to life, he notes that it is important that people “do them,” or be themselves. Marc compared the necessity of the ensemble to the use of color in paintings, “Just like a painting needs many colors to make it really vibrant and effectual, every player, no matter if they are the lead or in the ensemble, has a place and a purpose, and it’s our responsibility to find out what that is and live it to the fullest.”

His ideas on the place of performers onstage extends into his philosophy on life. “We’re all like a big puzzle,” he imagines. When two people meet they give each other a piece of their puzzle. “There’s nothing that we can do by ourselves, directly or indirectly. We are created for relationships. In doing what I do, I inspire people to do whatever it is that they were designed to do, whether it’s dancing, acting, or being something else.”

Marc’s strong work in shaping the production of Billy Elliot is already apparent after three dance rehearsals. Glimpses of what the show will be come into focus as the cast learns their dances and Marc urges them to commit to the style. The police chorus has adapted a series of sound effects Marc taught them into a running joke. He consults the directors to share visions of the show. Working with Marc Wayne as the guest choreographer is sure to be a great experience for those involved with Billy Elliot.