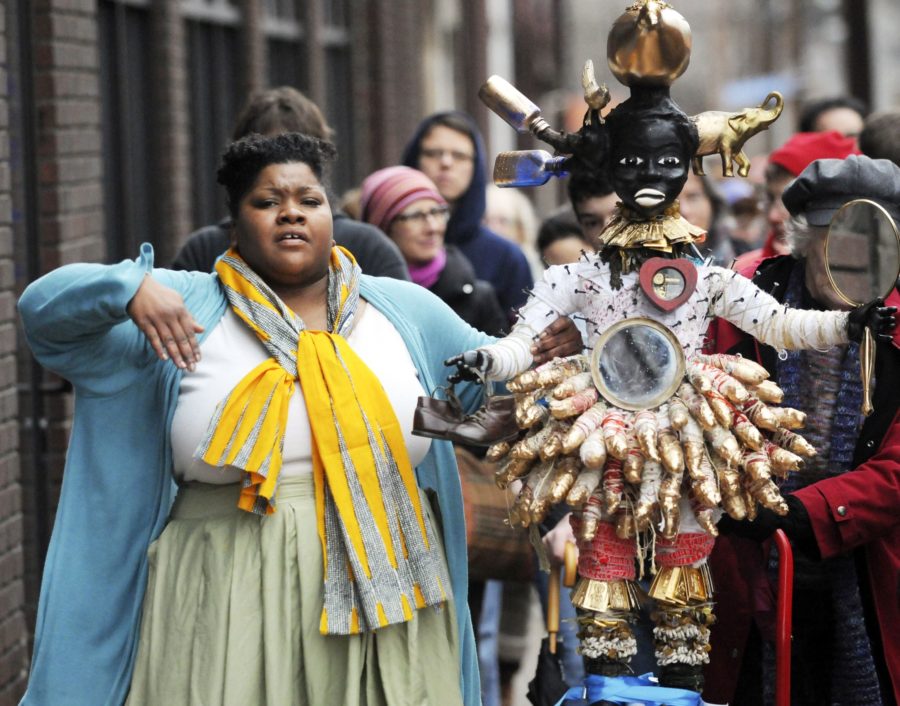 Vanessa German is an award-winning multidisciplinary artist based in the Homewood community of Pittsburgh, PA and her work can now be seen in the exhibition, Platform, currently on display in the Lawrence Arts Center large gallery. Join her on November 2 for an INSIGHT Art Talk and performance at 7pm.

The third of five children, Vanessa was born in Wisconsin and raised in Los Angeles. Her mother is a renowned fiber artist who raised her children to make things and create their own stories and entertainment. “We grew up with the ingredients to make ‘stuff’… and most importantly, fully realized faith in our imaginations. This is how we stayed alive—making our ideas leave our bodies through our hands, becoming tangible—and righteous enough for us to keep wanting to do it.”

Vanessa creates “contemporary power figures,” as she defines them, made of everyday objects transformed into an iconography of astonishing metaphors. Vanessa believes her power figures are “alive by sight, and the adventure that sight incites in every piece” has its own meaning. Her visual works have been shown in galleries and museums throughout the country and was recently acquired by The Progressive Collection, one of the preeminent corporate contemporary art collections in the nation, and The David C. Driscoll collection, Franciscan University Collection. Her sculptures will be represented in “African American Art 1950-Present,” produced by the Driscoll Center and the Smithsonian Institution.

Vanessa’s visual and performance work contend with the power and fragility of the human spirit. She grew up surrounded by Africans, Koreans, white folks, Mexican folks, strange folks, gay folks, sights, sounds, and scents according the ever-fabled melting pot. She also grew up at the foot of AIDS and gang violence, churches, co-ops, street vendors, house fires, and street music, from hip hop to meringue, every facet still found fibrous and illuminated in her story. Writer Graham Shearing observes, “She is a witness to what she finds and declares it loudly and passionately, and, for a shy woman, also fearlessly. She intuitively transforms her findings, her evidences, into her work.”

Vanessa has pioneered a performance style called “Spoken Word Opera,” which brings all of the drama and theatricality of traditional opera to intimate performances and contemporary themes through a dynamic hybrid of spoken word poetry, hip hop, storytelling, music and movement. Recent performances include TEDx Harvard, TEDx MIT, and TEDx Pittsburgh. Vanessa has written and performed in four evening-length performance works. As a member of the inaugural 2009/2010 class of fellows at the August Wilson Center of African American Culture, she created “root,” a spoken word opera. Vanessa is also the subject of the documentary film Tar Baby Jane.